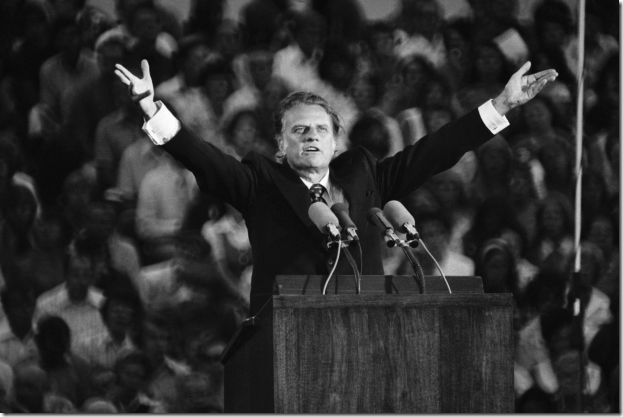 The Reverend Billy Graham passed away this morning at the age of 99. I think the world has lost its greatest servant of God.

Even for the non-religious, Graham is a remarkable figure. He spoke to more people than any other human being who has ever lived, reaching over 42 million people in person, preaching the message of the Jewish Messiah in 105 nations. He reached many kinds of people in different walks of life.

Graham reached me in the strangest of places.

Several years ago he gave a fantastic TED talk to a group of Silicon Valley technologists:

As a technologist myself, I was first surprised to see a preacher giving a TED talk! TED talks are for the technological, the futurists, the skeptics, the thinkers – what could a old fashioned preacher possibly say to this audience?

I was cringing before the video began, figuring it would be cliché old-hat religious pitches.

But Graham’s short 15 minutes on stage was something else entirely.

He first put me at ease with his gentleness and honesty. He acknowledged and praised the wonders of technology and modern medicine – noting how he personally benefited from science and medicine. Of the even-greater potential for technology and medicine, Graham says, “I would like to live in that [great future] age, but I won’t, because I’m 80 years old, and my time here is brief.”

Graham spoke a truth that was hard for me to swallow. In his gentle way, Graham broke a delusion that, I think, holds sway over many lovers of technology, science, and medicine. A delusion that has often held sway over my own thinking.

That truth? He showed that technology won’t – indeed, can’t –  address the worst problem humanity has. Science, technology, and medicine – for all it’s wonders and good – cannot address the human heart and its propensity for evil.

We technologists don’t like to hear this. We self-deluded ourselves into thinking technology will solve nearly every problem.

Modern medicine has solved numerous diseases through antibiotics, vaccines, and new novel treatments for everything from cancer to heart disease to AIDS.

Science has helped us understand germ theory, the need for sanitation, decreasing illness and containing plagues that would otherwise kill thousands.

The most optimistic thinkers among us believe that science-based medicine will eventually cure nearly every human disease.

But you know what cannot be cured? The human heart and its bent towards evil.

“Have you ever thought about what a contradiction we are?

On one hand we can probe the deepest secrets of the universe, we dramatically push back the frontiers of technology…we’ve seen under the sea, three miles down, we’ve seen hundreds of billions of years out into the future [through cosmology].

But on the other hand, something is wrong… [at this moment] we are ready to go to war with Iraq. What’s wrong with this? Why is it there are wars in every generation, in every part of the world?… We can’t get along with other people, even in our own families? We find ourselves in the paralyzing grip of self-destructive habits we can’t break. Racism, injustice, violence sweep our world, leaving a tragic harvest of heartbreak and death. And even the most sophisticated among us seem powerless to break this cycle.”

Why is it that no matter how advanced we are – and what wonders of science and technology and medicine we’ve achieved! – why is it that we’re so evil? Even increasingly so.

Why is it that in the 20th century – in which we saw the invention of the car, human flight, the computer, the internet, the eradication of polio and smallpox and a host of other diseases – why is it that we saw the greatest evils the world has ever seen in Nazi Germany and the brutal Communist dictatorships responsible for the death of over 100 million people?

(Or, on a smaller scale but more recent headline, why is it that 70% of the worst domestic shootings in US history occurred in the last 20 years, most recently last week’s Florida school shooting which killed 17 kids?)

Why isn’t technology addressing that?

Where is the disruptive technology startup that fixes human evil?

Where is the vaccine that prevents human wickedness?

All silly questions of course: science, technology, and medicine do not and cannot address the worst problem humanity has: the propensity for evil. It doesn’t event attempt to.

“I would like to see Oracle [the technology company] or some other technological geniuses work on this problem: how do we change man so that he doesn’t lie and cheat. So that our newspapers aren’t filled with stories of fraud in business, labor, athletics, and wherever else.”

Graham notes the real origin of the problem, and says that it cannot be addressed by science, technology, medicine, or any other future innovation.

“The Bible says it’s within our heart, without our souls. Our problem is, we’re separated from our Creator, who we call God. And we need to have our souls restored: something only God can do. ‘Out of the heart comes evil thoughts.’ Murder. Sexual immorality. Theft. False testimony. Slander.”

But he doesn’t just quote the Bible to this secular rationalist audience. He cites the rationalist’ own chief prophet, the atheist Bertrand Russell,

“The British philosopher Bertrand Russell, who was not a religious man, said, ‘It’s in our hearts that the evil lies, and it’s from our hearts that it must be plucked out.’”

I wonder how many of today’s rationalists could even agree with Russell’s statement about evil. I suspect very few could without apologizing and redefining terms. In my experience, many rationalists to try to muddy the waters by claiming there is no real evil, no real good. (One prominent atheist author stated that without a Commander, the commandment is useless; without a Lawgiver there is no real law, and morality is subjective.)

Graham mentioned his meeting Albert Einstein, and how Einstein too saw the problem of real evil:

“Einstein made this statement: ‘It’s easier to denature plutonium than to denature the evil spirit of man.’”

Technology is great, but can be used for great evil, Graham says.

“The problem is not technology. The problem is the person using it. King David said he knew the depths of his own soul. He couldn’t free himself from his personal problems and evils that included even murder and adultery.

Graham says our heart and our soul is something not measured by science, not addressed by medicine, left untouched by technology.

It was Graham’s yearning for God that led him, in the early 1950s, to desegregate the churches and assemblies where he was speaking. At one notable event, Graham himself walked down and cut the ropes segregating the white and black sections of the audience, and told the people that Christianity is neither white nor black, and that the Messiah is Lord over all.

Billy Graham dead at 99. Took this in OK City, 2003. MLK said, “Had it not been for the ministry of my good friend Dr. Billy Graham, my work in the Civil Rights Movement would not have been as successful as it has been.” Graham said there was no scriptural basis for segregation. pic.twitter.com/O8SCmNdGB5

Graham’s own death today, remarkably, revealed the hearts of people, some for good, some for evil.

While past US Presidents praised Graham, others showed utter contempt:

The big news today is that Billy Graham was still alive this whole time. Anyway, have fun in hell, bitch.

The great thing about Billy Graham is that he’d forgive you for saying that. https://t.co/1ArlgIQIKc

Why the hate? Evil hearts.

Some folks, particularly secular leftists, felt condemned by Billy Graham’s Bible-based preaching. While Graham boldly preached in the 1950s that “there is no Biblical basis for segregation”, it’s with that same boldness he consistently spoke against sexual immorality as defined by the same Bible: adultery, promiscuity, and homosexuality. For this, some on the left demonize him and celebrate his death today.

Celebrating the death of a righteous man is, well, wicked.

This is the same wickedness of the human heart that is left unaddressed by science, technology, and medicine.

Evil – the problem unaddressed by science, technology, and medicine – is addressed by God in this way: each person must acknowledge the evil he’s done.

Then, that person asks for forgiveness – both of God and the persons wronged.

Then, that person makes restitution – both with God and the persons wronged.

Then, that person – now with a softened and humble attitude – changes his behavior. The person is transformed from a wicked person into someone who reflects God’s own character. An angry and abusive alcoholic becomes a gentle, soft-spoken and clear-minded light for humanity.

We’ve seen this happen a thousand times; it actually works. It’s King David’s repentance. It’s Paul life-turn-around. It’s the message of Jesus and the Hebrew Prophets. It’s a cure for the worst problem humanity has.

And Billy Graham preached that message his whole life. To paupers and Presidents. And to everyone that would listen.

“Someday you will read or hear that Billy Graham is dead. Don’t you believe a word of it. I shall be more alive than I am now. I will just have changed my address. I will have gone into the presence of God.”

The world has lost – for now! – one of its greatest servants of God. His hope in the resurrection – a hope that Jews and Christians share – will one day be realized in full for the great Reverend Billy Graham. May his memory be a blessing for you as it is for me.