Summary: Religious hypocrites turn people off to God. We see it again this week with shocking revelations from the continuing Catholic pedophile scandal.

Warning: language and disturbing content related to the scandal. 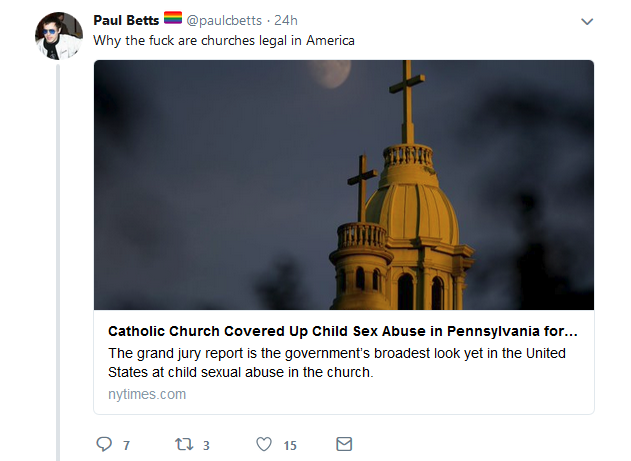 I wrote before how religious hypocrisy continues to heap shame on God’s reputation in the secular world.

It’s happening again: 300 Catholic priests in Pennsylvania were named in court as predators who sexually abused over 1000 children.

Worse, much of the abuse was coordinated among multiple priests and parishes.

Worse still, the hierarchy of the church was aware of the problem, and either did nothing or covered up the crimes.

In one case, a boy was forced to stand naked, posing like Christ on the cross while priests took pictures and added them to a collection of child pornography that they produced and distributed on the campus of the church.

Priests would mark boys who were being groomed for abuse by giving them gold crosses to wear.

In another case, a priest raped a young girl and arranged for her to get an abortion. His bishop heard about the situation and wrote a letter of condolence — to the priest.

In another case, a priest molested a boy over the course of two years, admitted to church officials that he’d been engaged in naked “horseplay” with the child, and yet was allowed to continue in ministry for seven more years.

In another case, a priest forced a boy to give him oral sex and then washed the boy’s mouth with holy water.

In another case, a priest molested a 12-year-old boy, admitted his crime to a church official, but the diocese ruled that the abuse wouldn’t “necessarily be a horrendous trauma” to the victim.

Dear God, what destruction these people have done. Lifelong damage to these kids. And yet-to-be-realized damage to the reputation of God and faith in the eyes of the world.

Shaming God’s Name in the Nations

Why the fuck are churches legal in Americahttps://t.co/VmyCtRLP7B

I engaged Paul about this – telling him how churches and synagogues do good consistently and regularly, and that it often goes unnoticed:

My church and I buy meals, cook and serve it to hundreds of homeless, poor, and elderly every month. And our church is one of millions. But that doesn’t make the news. pic.twitter.com/TWxo5flewO

But it doesn’t matter.

To secular people like Paul Betts, the damage is so great, all churches should be illegal.

(This has been tried, by the way. Churches were illegal in Mao’s atheist China, and likewise Stalin’s atheist Soviet Union, both of which enforced atheism in schools and persecuted millions of Christians and Jews. These civilizations committed the some of the worst atrocities the world has ever seen. I digress.)

It’s a sad state of affairs when we have to convince secular people why churches and faith are good things. God called Israel to be a light to the nations, and Messiah told his disciples the same.

Instead of being a light, the Catholic Church appears to be a factory for producing gay pedophile priests who turn people off to God, destroy innocent lives, and forfeit their souls in the process. What a darkness.

“It’s a sad state of affairs when we have to convince secular people why churches and faith are good things.”

And we can’t just slough it off on the Catholics. In Torah-observant People Behaving Badly, I documented Israeli Haredim (Ultra-Orthodox Jews) kicking and spitting at a woman in the streets of Jerusalem, shouting slurs and insults and calling her shiksa. Her crime was helping a car navigate safely through Orthodox protestors.

Two years ago, a Protestant youth pastor was sent to prison because he raped a girl in his care, and when she became pregnant, he forced her to get an abortion. And when she felt guilt about the whole thing, she committed suicide.

When my wife was young, a youth pastor at her church impregnated a young girl under his care. 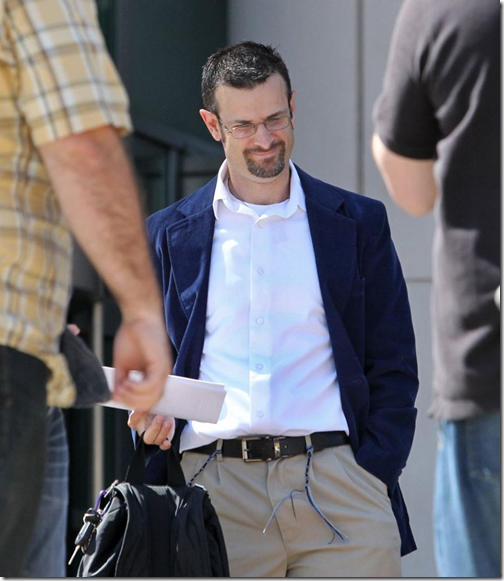 I suspect many of us have such stories of abuse in our circles. Maybe you’ve experience or witnessed sexual abuse, violence, financial abuse, emotional manipulation, controlling and judgmental behavior. All these things from religious people.

While I could lament that the media reports only the negative things – certainly reporting on 300 pedophile priests, but never on the millions of homeless fed in Jesus’ name – I can’t really blame people like Paul Betts.

Why? Many people in my circle of faith are in favor of restricting or banning Muslim immigration into the US because of a some violent Islamists. How can we blame secular people for wanting to ban churches because of some pedophile priests?

And not only are there 300 pedophile priests who are abusing children, but here you have a hierarchy of bishops and church leadership who either turned a blind eye, failed to report, or even covered up the abuse. Over the span of several decades.

Atheism isn’t the worst enemy of people of faith. It’s we religious people. Religious hypocrites doing evil in the guise of faith. A faith that commands us to do good, and we pretend to do good, but boy, do we doo bad.

There is no stronger way to take God’s name in vain than to do evil in His name. And this is exactly what these pedophile priests have done.

Religious Hypocrisy From of Old

1,940 years ago, Paul wrote a letter to religious people in Rome, a mix of Jews and non-Jews. He warned them of religious hypocrisy,

If you rely upon the Torah and boast in God and know His will and determine what matters because you are instructed from the Torah— and you are sure that you are a guide to the blind, a light to those who are in darkness, a corrector of the foolish, a teacher of the immature, having in the Torah the embodiment of knowledge and the truth—

You then who teach another, do you not teach yourself?

You who preach not to steal, do you steal?

You who detest idols, do you rob temples?

You who take pride in the Torah, through your violation of the Torah, do you dishonor God?

For as it is written, “the name of God is slandered among the nations because of you.”

God’s name is slandered in the nations because of you, religious hypocrites.

God’s reputation is shamed in the whole world because of you, religious hypocrites.

I’m at a loss what more to say.

I’m sickened and grieved that people who claim to follow Jesus did something so unspeakably wicked demonic to innocent kids. All under the guise of Christianity.