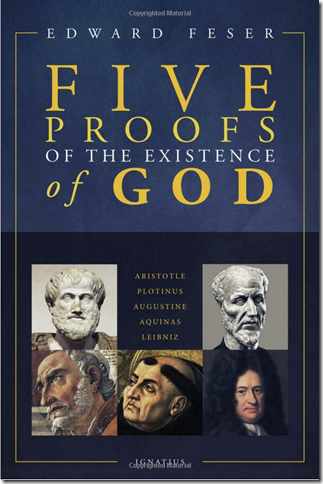 Last year I was delighted to come across 5 Proofs of the Existence of God, by Edward Feser. It’s a fresh take on classic logical proofs of God, some of which are thousands of years old.

Though it reads a bit academic – I, a layperson, struggled through parts of it – it’s nonetheless enjoyable and a powerful tool for defending the reality of God’s existence.

Yesterday, Feser appeared on Ben Shapiro’s Sunday Special. His explanations of some of the classical proofs of God helped me greatly.

There’s a saying, “If you can’t teach it, you don’t understand it.” So I’d like to write my thoughts on these arguments – teach them to you, fine Kineti reader – so that I better understand them myself. Along the way, maybe you’ll learn them better as well.

In the interview Feser says his favorite of the five classical proofs of God is the Aristotilian proof, also called the Unmoved Mover argument. This is the one we’re tackling today in this post.

Here’s Feser explaining in his own words the Aristotelian argument for God’s existence:

This proof of God goes back at least 2300 years, to the time of Aristotle, though it may be even older as Plato presents an earlier version of it.

The Aristotilian argument is based on the observation that change occurs: my fingers are moving as I type this, your eyes are scanning and interpreting the markings on your screen.

Aristotle calls this the actualization of a potential. My fingers had potential to move, and when they moved, the change was actualized. Your eyes had the potential to scan this text, now they are actually scanning it. This is change: something going from potential to actual.

And this affects all matter, including inorganic matter. Water changes from cold to warm. Molten lava to solid rock. Potential to actual.

My fingers are sitting ready at the keyboard: just look at all that potential. Potential to move downward and strike the keyboard.

How are they actualized, what causes them to start typing? An already-actual object, my nervous system, flexed my muscles and caused them to go from potential movement to actual movement.

In a nutshell, actual objects are the only thing able to move something from the potential state into actual state. Something can go from potential to actual only if there’s something actual that makes it happen.

Intuitively, my thought while watching the video was, “Ah, and those series of changers go all the way back in time until we get to God.”

This chain of changers – my fingers, by my nervous system, by my brain, held together by molecules in my body, and so on – where does the chain end?Aristotle argued we’d have a “vicious regress” if there was no bottom to the linked list of changers. (More on this theoretical vicious regress later.) There must be a root changer – a cause of change that itself was uncaused – responsible for all successive changes. 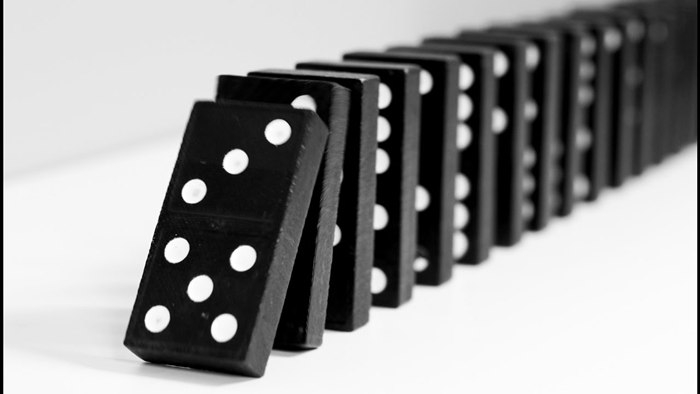 There must be an uncaused cause, an unchanging changer, an unmoving mover; the first domino. Aristotle argues such an unmoved mover is purely actual. It’s moving other things, it’s changing other things, without itself being moved or changed.

How do we know the unmoved mover is God?

Consider the properties of the first cause, that first domino. We observe that it must be both unchanging and powerful. Furthermore, it must not be governed by time nor by the material universe.

We’ve established that change involves going from potential to actual. But this first domino wasn’t any potential, it was purely actual, it wasn’t caused and isn’t susceptible to change. It’s unchanging.

Why is that important? Because everything in the known universe is susceptible to change. Time changes all material things, both organic and inorganic. Thus, the first mover must be not be a material thing; it doesn’t change with time. And since time has no effect on the unchanging changer, we say it isn’t governed by time like everything else in the universe is.

(Sidebar: is this a god-of-the-gaps argument? I’d say this is an observation of the universe; out best evidence shows that all things are governed by time; they change with time. There’s nothing in the universe known to be unchangeable over time. So, the evidence suggests that either there is no first mover – what Aristotle called vicious regress; an impossible, infinite recursion of movers – or there exists something outside of the material universe and outside of time.)

Power is the stuff required to change anything from potential to actual.

As I type this and as you read it, both of us are expending energy – we’re utilizing power. We consume food to produce energy, which we utilize to actualize something, to turn it from potential to actual.

Feser gives the example that an earthquake has the power to knock a boulder down a hill: the actualization of potential. The rock had the potential to roll down the hill, and the earthquake’s power actualized it.

Working our way back to the first mover, the first domino, because nothing caused it, it’s ultimately the source of all power activity.

It’s power – at the beginning of time and throughout all-time – drives all other power. It’s the first of all the dominos and not caused by any other power.

Every power exerted since then – the formation of the universe, the creation of planets and stars, the beginning of life – everything until the point of you reading this very sentence – all of it started because of the enormous power exerted by the first mover.

(The Hebrew Bible phrases it as אֵל שַׁדַּי, El Shaddai, usually translated as God Almighty; in plain modern English we would say God the All-Powerful.)

Are we sure there’s a first mover? Why not a vicious regress?

How do we know there’s a first mover? Why can’t we have an infinite string of movers moved by another mover?

Feser says the problem with having an infinite chain of movers – what Aristotle calls a ‘vicious regress’ – is that it keeps deferring the explanation.

Sidebar: in The Universe Had a Beginning, I noted a similar problem of scientists just kicking the can down the road; deferring the answer. For example, modern cosmology posits the universe had a definite beginning about 13.7 billion years ago. But physicists uncomfortable with the reality of a universe that suddenly came into existence – the instant of creation – have tried to say there are multiple universes (multiverse theory) or the universe expands and contracts infinitely from nothing to something (oscillating universe theory). Both fail to answer the question of what created the universe, and instead merely kick the can down the road. In the case of the multiverse theory, the can is kicked down the road, and the question becomes “what created the thing that creates the universes?”

Feser says the vicious regress fails to answer the question we started out asking: “What caused the first actualization?”

Why not just say, “We don’t know what started the universe?”

For some, because science doesn’t currently know what could cause the universe to come into existence, some say, “Who knows? Why posit any explanation at all?”

Feser answers with an analogy. Suppose a school student in chemistry class mixes the wrong chemicals together and causes an explosion. “There’s no explanation, it just happened”, say the investigators.

Would anyone be satisfied with such an answer? Of course not.

We don’t accept such answers in science or in everyday life; this “throw up your hands” answer is only acceptable, it seems, when the answer points to divine origins. And this, says Feser, is cognitive dissonance, a mental blind spot, on the part of proponents of atheism.

“When you push forward consistently this basic idea that things must have explanations, you’re going to be led unavoidably to the existence of an unmoved Mover, an uncaused Cause.”