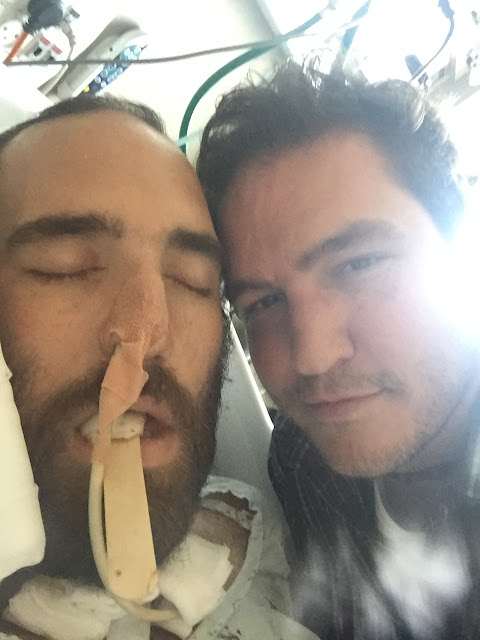 I went to Israel last week to visit my younger brother Aaron in the hospital.

The first night we were there, things looked pretty bad.

Aaron was laying there in the bed, in a coma, convulsing due to seizure tremors. Due to pneumonia (or a blood infection? The doctors and nurses gave us conflicting answers), his breathing was labored. He was on a ventilator because he couldn’t breathe on his own. He had a large stream of reddish mucus flowing from his nose. His hands and arms were terribly swollen. He was hot to the touch, sweaty and clammy due to a fever brought on by the infection.

That first night I did OK. We prayed with Aaron and headed to our Airbnb, exhausted from travel.

The first day was OK – Aaron was slowly improving and his fever was a bit reduced.

But the 2nd day was hard for me. The doctors, ever-pessimistic and skeptical as undoubtedly any person in their profession must be, were full of bad news.

“We don’t think there is any higher brain function.”

“He cannot hear you.”

That day I cried a lot. I might lose my brother forever.

My sister was with me for the trip. She did better than me. I’m amazed how strong a woman she is. When the doctors came with pessimism, she would always respond with hope instead of despair or sadness. The doctors would bring negative outlooks, and my sister would respond to them with trusting in God and rejoicing in the hopeful signs of improvement we saw in Aaron.

But I cried like a baby, afraid to lose my brother.

That week was a rollercoaster. Overall, Aaron’s health seemed to improve. His fever reduced, his swelling reduced, some days he would squeeze our hand. He would occasionally breathe on his own, and the ventilator would beep to let us know. Various antibiotics were given to treat the pneumonia. His breathing normalized and his temperature subsided.

The last day I was there was Aaron’s best day yet. His seizures reduced, and his tremors nearly disappeared. He was in a coma, but totally at rest. All signs pointing in the right direction, we saw Aaron move his foot. We asked him to do it again. He did it. And again. And again. Several times he responded to verbal commands. There were no seizures or tremors going on; this was no fluke. It appeared Aaron really could hear us and respond to us in that moment.

The night before, my sister had a lucid dream where a spirit of death held her captive, prevented her from moving and breathing. In the dream, as my sister was suffocating and unable to move, God issued a command, and when He spoke the word, she was released. She took a gasp of air, jumped up in her bed and was freed. My sister woke me immediately after the dream, crying and desperate for Aaron’s deliverance and healing. We prayed right then and called our parents to do the same.

On Wednesday, we noticed our Airbnb host had a dusty old guitar; we took it to the hospital and sang psalms over Aaron.

So many of the psalms are fitting for a person in the hospital. It’s crying out to God for deliverance, healing, rectifying an injustice. For Aaron, all these things rang true in my mind.

I learned to trust God that week.

When you hear negative news, it’s easy to despair. “I might lose my brother!” But when you read the psalms, there’s joy and peace, even in the midst of trouble. My favorite psalm, Psalm 23, is exactly that:

“Even though I walk through the valley of the shadow of death, I will fear no evil, for You are with me. You prepare a table for me in the presence of my enemies.”

In the midst of trouble – the valley of the shadow of death – there is peace: “For You are with me, Your rod and staff comfort me.” And the psalmist ends in joy: “Surely goodness and mercy will follow me all the days of my life, and I will live in God’s house forever.”

Despite the negative news about Aaron, I chose to believe that God is ultimately in control, even of small things like the life of a single person. (I’m reminded of Psalm 8: “When I consider the vastness of the universe, what is man, that You care about him?”)

I believe God orchestrated all of this, even the tragedy of Aaron’s drowning. Even if I don’t understand it. Aaron’s life or death is up to God. And I know God will do what’s right – He always does.

While the doctors piled on bad news and pessimism, and there remains a possibility that my brother may die or never wake up from the coma, my sister and I were there joyfully praising God.

If the time comes that Aaron wakes from the coma, then God’s done what is right, and we’ll be joyfully praising God. Times 10. 🙂 (It’ll be a giant party in Jerusalem, just sayin’.)

If the time comes that Aaron passes away, then God has also done what is right. I’ll praise God for the years I’ve known Aaron and been blessed by his life.

Abraham said in Genesis, as he argued with God: “Won’t the Judge of all the Earth do what’s right?”

I know the Judge will do what’s right, yes, even with Aaron life.

Please keep Aaron in your prayers, friends. Please read a psalm on his behalf.