Israel’s Shas party, the 3rd largest party in the Knesset, held a political rally last night, in which party leaders promised eternal life to all who vote for Shas in the upcoming elections. ಠ_ಠ

Why vote for Shas? “To show [God] that we love him” 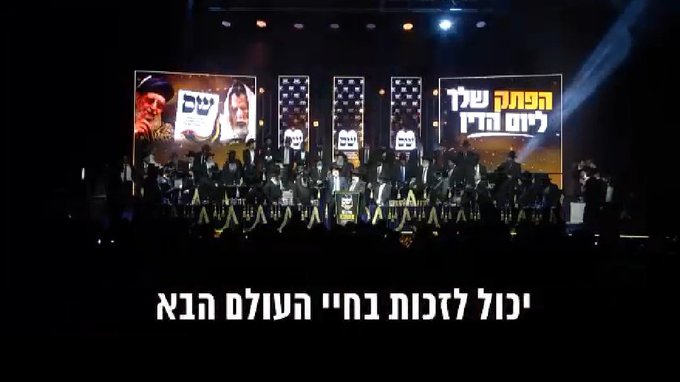 The one who votes Shas and recruits others to do so can “gain [their] life in the olam haba / the world to come.”

While the reporter lamented these messages as not aligning with liberal democracy, I’m more concerned that the message doesn’t align with authentic Jewish values; authentic Bible values.

This is another example of Torah-observant people behaving badly. They are abusing God’s goodness and the good character of the Bible for political gain. They are making a promise – eternal life in the world to come – which they cannot make good on; the ultra-Orthodox aren’t the ones who determine your eternal status. (Thank God!)

The Jewish luminary Paul the Apostle wrote that God’s reputation is desecrated when religious people do evil things. I am seeing examples where the ultra-Orthodox continue to do precisely this. This group desperately need revival and reform. (I suppose we all do! But these cases seem egregious to me.)

This is really sad. It’s reminiscent of Christianity’s own abuse of the Bible for political reasons: whether the Catholic Church in the Middle Ages offering forgiveness of sins in return for donations. Or even modern religious Christians in the US whose theological premises assume Jesus aligned almost perfectly with the Republican or Democratic parties.

I notice among Messianics and Hebrew Roots folks here in the nations that there is a kind of…idealization of Israel. To be sure, Israel is a beautiful country! It’s a miraculous nation. God’s placed His name and presence there unlike any other place on earth. My heart’s home is Israel.

But Israel has its problems. And abusive religious parties is increasingly one of them. Next week’s elections will tell the current state of affairs; more concerning still is the increasing power of the ultra-Orthodox in Israel. See it for yourself in the Twitter thread, where secular and religious Israelis are arguing their positions: secularists say, “Don’t force your religion on me!”, and the religious arguing, “But Israel will be majority ultra-Orthodox within 1 generation – let us have our way in our land.”