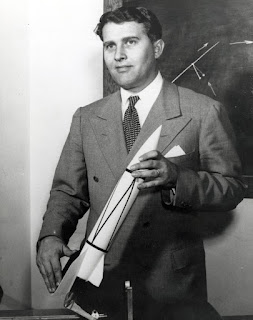 In the aftermath of World War II, Wernher von Braun, the brainchild of Nazi Germany’s rocket program, was brought to the US and conscripted to work for the US Army on its fledgling rocket program.

In the coming years, von Braun developed the rockets that launched the US’s first space satellite. By 1960, he lead the team that built the heavy rockets that propelled the first man to reach the moon.

Now pause a minute and consider: was this a good thing for humanity?

If viewed in the positive light, the US took knowledge that was being put to evil use — Nazi V-2 rockets that reigned destruction on London civilians — and redirected it to something beneficial in the form of putting a man on the moon.

But one might view it in the negative light. The US space program was built upon the backs of evil Nazi scientists. Rather than destroying the enemy, the US military industrial complex co-opted the enemy and forced him to change sides, putting his knowledge of war to use on America’s ballistic missile program, which has undoubtedly taken the lives of thousands (millions?) of civilians over the course of the last few decades.

There’s truth to both sides, isn’t there?

I’ve noticed this pattern repeated all over.

Vaccines have saved millions of lives and eradicated diseases like smallpox and polio. But forced vaccination goes against American ideals of liberty and self-determination. In the 1960s, cells from two aborted children were used in the making of some vaccines, and those cell lines remain in use today.

Do you focus on the positive or the negative?

Religion has produced sincere people of faith who are driven by ideals like “love your neighbor as yourself” and “consider others more important than yourself”, to improve themselves and repair the world, causing it to come more in line with the Divine image. But it’s also produced holy wars, genocides, persecution, torture, suicide bombers, and worse.

Capitalism has raised millions (billions?) out of poverty and into a better life, as we benefit from goods and services produced through capitalism. But it’s made wage slaves of us all. We work and work and work, so that we can have money, money, money. To buy more stuff, stuff, stuff. (To such an extent, might I add, that the youngest generation’s embrace of alternative economic systems has resulted in a Socialist candidate nearly winning the Democratic Presidential nomination.)

Medicine, surgery, antibiotics, and more has saved perhaps billions of human lives and reduced suffering. But, isn’t it corrupted by money? Aren’t doctors over-prescribing pain meds, resulting in nationwide opioid addiction crisis? We’re bombarded by commercials of medicines we don’t need or don’t fully understand their problems, leading to addiction and unintended side effects. And isn’t much of modern medical knowledge standing on the shoulders of Nazi and Imperial Japanese medical experiments on humans, the inheritance from Dr. Mengele? Isn’t the whole field corrupted by the giant Medical Industrial Complex?

Technology is amazing and improved our quality of life. If you’re reading this, it means you have a computer (maybe even a pocket-sized one!) that works anywhere without wires and connects you to the Giant Repository of the Sum Total of Human Knowledge we call the internet. You’re probably sitting in a heated, spacious home, with a giant metal air-conditioned throne-on-wheels sitting in your driveway. On the other hand, the internet has produced all kinds of perversion, pornography, and immorality of many kinds; the recent school shootings originated with troll chat rooms that encouraged the shooter to “get a high score” (that is, murder many kids).

Education has raised humanity out of darkness and into enlightenment, leading to innovation and improvement of the world. That is, until education is directed by political motives, at which point it becomes closer to political or anti-religious indoctrination. And consider the modern education system, which leaves new graduates in debt by tens of thousands of dollars.

Some groups, for example, secluded religious communities like the Amish or the Ultra Orthodox communities might view many of these in the negative, resulting in shunning or restricting technology, trading capitalism for study, opting out of vaccines and modern medicine, and more.

But are those religious groups really better off? I’m not at all convinced they are. Those groups are certainly not being a light to the world; they are literally closing off the world.

Even within our own movement, there is such a view on Christian holidays. Christmas celebrates the birth of the Messiah, but is tainted by pagan myths and traditions adopted or co-opted by the early Church. (Or, celebrating Messiah’s birth is great, but what does boughs of holly, trees, reindeer and elves have to do with that?) Ditto for Easter, whose date was chosen to not coincide with Passover, so as “separate ourselves from the detestable company of the Jew.”

How should disciples of Yeshua view complex subjects like these, where there’s a clear benefit but a problematic background?

Paul’s encouragement to the Philippian believers comes to mind:

I think that’s a good default: focus on the positive. Otherwise we become heresy hunters of religious or secular variety, Negative Nannies always pointing out the dark side, the ultimate Debbie Downer. Nobody wants to be around such people!

I can think of abuses of Paul’s words, though. Focusing on the strengthening of Germany’s desperate economy during the 1930s would be the wrong application.

I’m not much better here. I can take Paul’s words and default to the positive. But when and where do we say, “The negatives outweigh the positives?”

Or, thinking about this a little deeper, maybe the answer is not yes/no, right/wrong. Maybe we should, for example, embrace the positives of vaccines while speaking out against abortion and pressuring manufacturers to avoid using cell lines from aborted children. Maybe Hebrew Roots folks can appreciate the good in Christian holidays while speaking out against adoption of things not from the Lord?

A question remains, however: can something with negative origins still be a net good? My answer is that yes, absolutely, because nearly everything is tainted in some way. Including, friends, you and I. If things are irredeemable because of tainted origins, then humans themselves are irredeemable. And that statement runs counter to the work of God in human history.