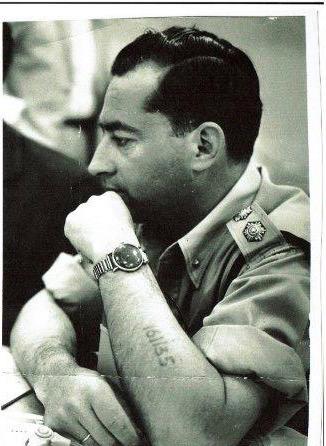 To commemorate the 75th anniversary of the liberation of Auschwitz, the @Israel Twitter account gave Holocaust survivor Miki Goldman control of their account yesterday to tell his story and open up for Q&A. His remarkable story shows a beautiful arc of justice as he goes from Auschwitz survivor to prisoner of Great Britain to Tel Aviv policeman to investigator in the Adolf Eichmann trial, and more:

My name is Miki Goldman. I’m a survivor of #Auschwitz which was liberated 75 years ago today. Today I’ll be taking over the State of 🇮🇱 account to share my story & help make sure that the 🌍 never forgets the #Holocaust. RT this and reply with your questions. #HowMikiSurvived pic.twitter.com/Y9QpuFkfVw

Miki tells of how he ended up at Auschwitz and survived for 2 years:

I was born in Katowize, Poland in 1925. When WWII began I escaped with my parents and siblings to Przemysl. From there I was deported to the Szebnie camp & in November 1943, I was transferred to Auschwitz until the liquidation of the camp in Jan. 1945. #HowMikiSurvived #HMD2020 pic.twitter.com/67XH32CJNg

He explains how he escaped the Nazis as the Red Army approached the camp. As the Nazis evacuated the camp, they led the prisoners on a death march; Miki saw many dead or dying of hunger or hypothermia, face-down in the snow. At an opportune moment, he falls face down in the snow along the side of the road, pretending to be dead. The plan worked:

On January 17, as the Red Army was approaching, the Nazis evacuated the camp & led us on a death march. Many people died from hunger & hypothermia along the way. I escaped by pretending to be dead in the snow & was hidden by polish peasants. #HowMikiSurvived #HMD2020 #Auschwitz75 pic.twitter.com/o3ewD5vsHg

After staying hidden for a few weeks, Miki joins the Red Army to bring the fight to the Nazis:

3 weeks later, the Red Army liberated #Auschwitz. I joined the Red Army to help liberate Czechoslovakia from the Nazis but was subsequently wounded in the leg. I spent a month in a military hospital, where I began writing my memoir. #HowMikiSurvived #HMD2020 #Auschwitz75 pic.twitter.com/7C7LCCWmxK

Two years after World War II ended, Miki boarded the Hatikva boat to Israel. At that time, Israel was not yet a formal nation, still under British control. The British seized the boat and Miki spent over a year in a detention camp in Cyprus. During that time, the nation of Israel was formally founded on May 14th, 1948, ending British rule. Within the year, Miki was released and arrived in Tel Aviv:

In May 1947, I boarded the Hatikva 🚢 from Italy headed to #Israel. The ship was seized by the British & we were sent to #Cyprus, where I spent 1.5 years in a detention camp. In January 1949, 4 years after escaping #Auschwitz, I arrived in 🇮🇱 my Jewish homeland. #HowMikiSurvived pic.twitter.com/kbf1sbUgWm

There Miki became a police office and investigator in Tel Aviv, eventually serving with the legal team that prosecuted the Nazi war criminal Adolf Eichmann, who had fled Germany to Argentina and was subsequently captured by Israeli intelligence institute Mossad:

After arriving in 🇮🇱, I settled in Tel Aviv & enlisted in the Israeli police. When Adolf Eichmann, one of the most brutal Nazis was captured in 1960, I served as an investigative officer in the case & personal aid to Gideon Hausner, the main prosecutor. #HowMikiSurvived #HMD2020 pic.twitter.com/B5MK4dSeep

Miki on the feeling of dread of pure evil upon seeing Eichmann:

Throughout the trial, I collected testimonies from #Holocaust survivors from #Poland. The first time I investigated Eichmann, when he opened his mouth I had the feeling I was seeing the gates of the crematorium. #HowMikiSurvived #HMD2020 pic.twitter.com/MC2BG2bpR6

During the trial, a witness against Eichmann testified he saw a Nazi soldier shoot and kill Jews and whip a small boy 80 times. “Can you point out the youth who received the 80 lashes?” “Yes, he’s sitting right there.” [points to Miki Goldman].

I was shocked when a witness on the stand referenced the time I received 80 lashes from a Nazi. Before the Eichmann trial, I had only shared this once. When the person who heard my story didn’t believe me, I never shared it again (until the trial). #HowMikiSurvived #HMD2020 pic.twitter.com/Wd7Yq3w6Rl

As justice was carried out and Eichmann was sentenced to death by the Jerusalem court, Miki recounts a moving experience, a fitting end to the Nazi butcher:

I was 1 of 2 witnesses at Eichmann’s execution & 1 of 2 people who disposed of his ashes. After spreading his ashes in the ocean, I instinctively said “thus let all your enemies perish, Israel”. Someone next to me answered “amen”. #HowMikiSurvived #HMD2020 #Auschwitz75 pic.twitter.com/n5wDFihWdv

One such organization is my own charity, Bless Israel. We raise funds for Holocaust survivors and distribute the funds through on-the-ground charities like Chevra Humanitarian, Vision for Israel, and the Joseph Project. Holocaust survivors like Miki have a short time remaining on this earth – I urge you in Yeshua’s name to bless them financially. I don’t care which organization you do it through. Because we share in Israel’s spiritual blessings, how much more should we return the physical blessings and abundance to the Jewish people? And if Israel ought to be blessed, how much more these precious few living Holocaust survivors?