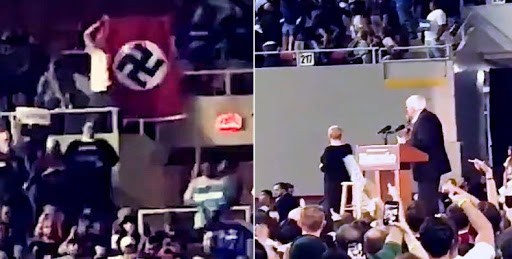 A Nazi flag flown at a recent Bernie Sanders rally. It’s not what you think.

Think about the last time you said something or did something that turned out to be wrong. What happened next – did you double-down (tribalism)? Or did you retract and apologize (integrity)?

I witnessed this tension in the past week when Hananya Naftali, an IDF veteran and lover of Israel, tweeted a misleading photo:

A Nazi flag was waved during Bernie Sanders rally in Arizona.

It doesn’t surprise me. This is exactly what Bernie Sanders is promoting. #BernieSanders pic.twitter.com/2teapeweWn

At first glance, confirmation bias kicked in: I’m no fan of Bernie Sanders; contra Bernie, I’m pro-life, pro-Israel, and pro-Biblical values. Additionally, Hananya is an ardent defender of Israel and believer in Messiah.  Normally I’d have just ♥’d that tweet and moved on.

But, I dug into the story, and it turns out it’s misleading.

Yes, a Nazi flag was flown by an attendee at a Bernie Sanders rally. But it was flown by a troll, someone who hated Bernie. Video emerged of the Sanders crowd booing the Nazi, who then was removed from the stadium while shouting racial slurs.

Hananya’s tweet was misleading. I replied back in what has become my most popular tweet of the year (ha!):

Love ya, Hananya, but to be fair, this guy was boo’d and removed from the event. You should remove this tweet.

(Having dozens of communists ♥ that tweet was…a jarring experience. 😆)

Sadly, Hananya didn’t delete that Tweet. Which is a shame, because it reflects poorly on him and the pro-Israel, pro-Biblical values he stands for.

In the recent Israeli elections, candidates and their supporters demonized the other side with untruths.

With the US elections coming up, we’re witnessing the same among candidates and their supporters: allegiance not to truth and integrity, but to a brand of politics.

Even now news organizations, journalists, and TV personalities are using the virus outbreak to demonize the candidate and political party they don’t like. “If only we had a left-wing government”, “If only we had universal healthcare”, etc. (This despite the virus afflicting both left-wing and right-wing nations, with and without government-provided healthcare.)

Let it be a lesson for us as Yeshua’s disciples: allegiance to integrity and truth is priority. When we make mistakes, don’t double-down. Admit, retract, apologize, and move on.