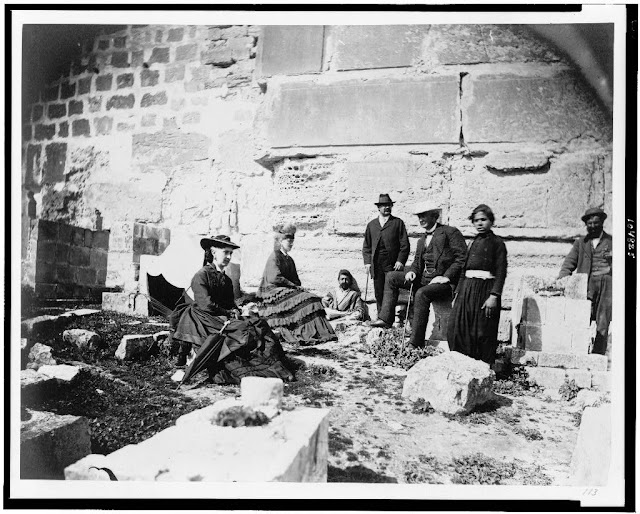 Mark Twain (center) visiting Jerusalem in 1867 with a group of Christian pilgrims.

The Bible makes remarkable, almost Utopian statements about the future of Jerusalem:

A mere sampling; the psalms and prophets and the gospels wax poetic about Jerusalem and God’s plans for that city.

But Jerusalem today is nowhere near that Biblical ideal.

A few months ago when I stayed in Jerusalem for my brother’s burial, I was struck by how distant the modern city is from the Biblical utopia. Myself, my dad, and my older brother stayed in outer Jerusalem (that is, the expanded modern city). We saw that the streets are narrow and grimy. There were empty beer bottles on outside windowsills. One night walking back to our apartment, an Orthodox youth was relieving himself on a wall near our apartment. There was various trash on the streets. It just felt messy. It was remarkable only for its grime.

And of course the religious shysters of Jerusalem! After Aaron’s burial and the completion of a week of mourning, there are religious guys going around the cemetery asking for donations and eating food reserved for the mourners, all in return for saying kaddish or some other blessing of the dead. (Can you imagine the Christian equivalent – if pastors roamed funeral homes or cemeteries asking for donations and inviting themselves to your dinner in return for reading Psalm 23 for the deceased?)

More religious abuse: On my brother’s tomb, the religious wished to inscribe on his stone, “Son of Abraham and Sarah” – a nice religious tradition meant to erase from Aaron’s life the influence, love, and care that his parents had for him, even in his rebellion against God and against his own family.

Yet more unholy religious garbage in Jerusalem: in the Old City of Jerusalem, there are various religious hucksters who, upon seeing a group of Christians touring the city, will jump in front of the group with their guitar to play either Hava Nagila or a poor man’s version of Leonard Cohen’s Hallelujah — all in return for a few shekels, of course! (Or, as I witnessed a few years ago, an updated version of Am Yisrael Chai, but with lyrics that insert Rebbe Nachman as the center of the song’s devotion.)

Or how about the religious patrolling the wall and their building the dividing wall between Jews and Gentiles: “Is your mother Jewish? Great, let me bind tefillin with you! No? Fine, here’s a brochure where you can give us your money, you dirty gentile.”

A caveat, a respite in the midst of the religious garbage is the good report about the Old City of Jerusalem. The original, smaller Jerusalem now encompassed in the larger modern Jerusalem, in which lies the Western Wall and the Temple Mount and many of the ancient sites still emanates its beauty: the old stone streets so traveled they are becoming smooth, the ancient walls whose crevasses are filled with growing plants and stuffed prayer notes. The Temple Mount is beautiful despite the Islamic colonialism. Despite the distractions, and the emptiness of a city missing its grand Holy Temple, the old city of Jerusalem remains holy.

Still, the joy of the whole earth Jerusalem is not.

First, it’s easy to be discouraged and think the words of the Bible will never come to pass. (Many Christians may reinterpret these passages to mean something other than their plain meaning, for example.) Maybe Jerusalem’s time has passed; it’s glory during the first Temple era never to be surpassed.

On the flips side, it’s encouraging to realize that Jerusalem is today much closer to being the joy of the whole earth than even a century ago.

Mark Twain had famously visited the land of Israel in the late 19th century. He reported,

“It seems to me that all the races and colors and tongues of the earth must be represented among the fourteen thousand souls that dwell in Jerusalem. Rags, wretchedness, poverty and dirt, those signs and symbols that indicate the presence of Moslem rule more surely than the crescent-flag itself, abound.

Close by is the Golden Gate, in the Temple wall–a gate that was an elegant piece of sculpture in the time of the Temple, and is even so yet. From it, in ancient times, the Jewish High Priest turned loose the scapegoat and let him flee to the wilderness and bear away his twelve-month load of the sins of the people. If they were to turn one loose now, he would not get as far as the Garden of Gethsemane, till these miserable vagabonds here would gobble him up, sins and all. They wouldn’t care. Mutton-chops and sin is good enough living for them. The Moslems watch the Golden Gate with a jealous eye, and an anxious one, for they have an honored tradition that when it falls, Islamism will fall and with it the Ottoman Empire. It did not grieve me any to notice that the old gate was getting a little shaky.

A fast walker could go outside the walls of Jerusalem and walk entirely around the city in an hour. I do not know how else to make one understand how small it is. The appearance of the city is peculiar. It is as knobby with countless little domes as a prison door is with bolt-heads. Every house has from one to half a dozen of these white plastered domes of stone, broad and low, sitting in the centre of, or in a cluster upon, the flat.”

Twain described Jerusalem as a barren wasteland, poor and abandoned, dirty and wretched.

But here we are a century later, and now the Jewish people have returned to Zion and Israel is once again a nation and the survivors of the Holocaust and their descendants now richly decorate the land of milk and honey. Jerusalem, even with all the current ugliness, is more beautiful now than any time in the last 1,950 years since the Romans destroyed the Temple in 70AD.

That gives hope for the future; that Jerusalem might still yet become the joy of the whole earth.

In Zechariah 8, when God talks about the majestic future of Jerusalem, He preempts our skepticism and unbelief:

“I the LORD of Hosts declare this: ‘It may seem difficult in the eyes of the remnant of this people in those days, but will it also be difficult in My eyes?’. “Thus says the LORD of Hosts, ‘Behold, I will save My people from the land of the east and from the land of the west. I will bring them back and they will live in the midst of Jerusalem. They will be My people and I will be their God, in truth and righteousness.’

Jerusalem will one day be the joy of the whole earth.