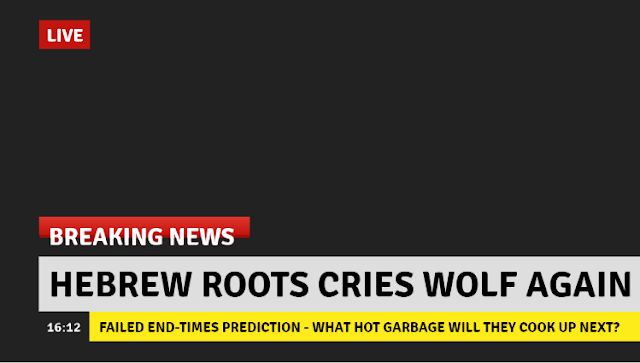 Today’s post is from Lucas, a recent high school graduate who grew up in the Messianic and Hebrew Roots movements. I have known this young man since he was a little kid: he’s a talented musician and heartfelt worshipper, devoted to the Lord, a gentle soul, one of the kindest people you’ll meet. And he’s here to tell you that sensationalism is turning young people away from the Hebrew Roots movement.

What is sensationalism? Lucas gives some examples in the post, but I’d include some of the foolish things I’ve personally witnessed: end-times predictions, flat earth theories, blood moons, outlandish claims about the end times, portals, serpent seed and all its variants, conspiratorial claims about modern science and medicine, reframing contemporary politicians as end-times players from the book of Revelation, assertions about the mark of the beast, to name just a few.
Notice none of these things have to do with either a Jewish return to Yeshua (Messianic Jewish movement) or a return to Torah-based morality (Hebrew Roots movement). I consider them aberrations and distractions from what God is calling us to in the broad Messianic movement.
And, as Lucas calls out, sensationalism robs this movement of thoughtful, reasonable young people who find no fruit amidst the craziness and doom. With that, I hand the floor over to Lucas.
I grew up in a very conservative bubble.  My parents have instilled conservative values in me.  All 4 of my grandparents voted for Trump, as well as my two great-grandmas.  My homeschool group – very conservative, as homeschoolers almost always are.  Here at our local Messianic congregation, everybody is conservative.  I grew up surrounded by conservative adults.
The president of my childhood was Barack Obama.  I barely recall Bush ever being in power.  Obama became our president when I was 7 years old, and he left when I was 15.  During those whole 8 years, I don’t think I heard a single positive thing going on in the government.  I grew up hearing all these negative things that were happening to our country, and I used to worry about it. I agree that he was not a great president for this country, BUT I grew up hearing a lot of sensationalism tied into it.  I grew up regularly hearing these statements from all the adults in my life:
Still even now, I hear adults sensationalizing.  I have heard adults say recently that, “God is coming back in ten years tops.”
“Any day now, the Lord is gonna come back.  We’re so sinful.”
“This coronavirus is proof that God is judging us right now because of our sins.”
I grew up hearing these statements all the time, and it caused me to grow up in a lot of fear as a young child.  Kids naturally believe everything that adults say! I remember being 7, 8, 9, 10 years old, wondering if America was still going to be a free country by the time that I was going to graduate high school. I used to fear about if I was going to have a future or not.  I went to my parents while I was writing this paper, because I needed to be delivered from all these fears that I held onto growing up as a kid.  I know that none of the adults who said these things purposefully meant for me to feel hopeless, and I don’t hold any of those adults in discontent.  But, today I issue a warning to all the adults in our movement regarding sensationalism, because it does damage the hearts of young people.
Here’s the thing.  It’s ok to be upset about what is going on.  We can’t just bury our head in the sand and pretend that nothing bad is going on.  Anyone who knows me, knows that I love talking about politics.  I listen to podcasts almost every day.  I do enjoy hearing about what’s going on in our world, and I do enjoy discussing it with other people.  What I can’t stand is hearing the sensationalism that adults link to current events, when are always proclaiming the gloom and doom instead of just talking about the facts of the event itself.
This is a problem beyond our movement. Consider the following video, in which the conservative Candace Owens speaks to the liberal David Rubin about doom & gloom sensationalism in the political world, especially among young progressives:
Whether it comes from politics or faith, doom and gloom sensationalism damages young people, more than what adults realize.
Here are some examples to piggy back off what Candace and David were saying in the above video.
Consider when a bad thing happens in our world, and an adult says, “See!  This event is proof that God is judging our nation because of XYZ.”
Who are you to decide why the things of this world happen?
Yes, the Bible says I will bless the nations that are righteous and judge those who are wicked. But do you know the thoughts of the Lord?  Can anyone truly know what is a judgement from Yahweh and what isn’t?  You are stepping in the place of God by saying, “This is God’s judgement for XYZ.”
Undoubtedly, this nation has committed numerous evils. But who are we, as simple humans, to pronounce when America as a whole is ready to be judged? The “America” that we interact with in our every day lives is such an insignificant fragment when it comes to judging a nation of 327 million people.  The kingdoms of Israel and Judah committed many heinous acts, but God had mercy on them several times.  God didn’t just wipe them off the earth because they were going astray.  He gave them several chances, and after a few hundred years, he finally handed them over, Israel for good, whereas Judah he saved.  Nevertheless, America is not the chosen land.  Jeremiah instructed the exiles going into Babylon in Jeremiah 29:5-7, saying,

Build houses and settle down; plant gardens and eat what they produce. Marry and have sons and daughters; find wives for your sons and give your daughters in marriage, so that they too may have sons and daughters. Increase in number there; do not decrease. Also, seek the peace and prosperity of the city to which I have carried you into exile. Pray to the Lord for it, because if it prospers, you too will prosper.

He was telling them to prosper while in captivity and pray for where they were living, not curse it!
What God is going to do with America is fuzzy.  America is not in the Bible.  We were a nation founded on Biblical principles, but we are not His chosen country; Israel is. We have no idea what future God has in store for America.  We have no idea if America will be a free nation when Yahweh does return or not. The harsh fact is – If America crumbles, Yahweh forbid that it ever will, it doesn’t necessarily mean that Yahweh is coming back because of it!  America could crumble, and we could still be here 1000 years!  America crumbling, in any way shape or form, does not determine when Yahweh comes back, and we forget that.  Although we may not like the morality that exists now, who are we, a small insignificant human, to decide when a nation of 327 million people is due judgement?  God was willing to save the city of Sodom for 10 righteous people!
Another thing I can’t stand hearing from adults is when they set a due date for the end of the world.  When adults keep talking about how America is going to be judged soon, and that we only have 10 years or 20 years to go, what message does that imply to a young person?  It implies that people like me don’t have a future.  I am just about ready to start my life.  I want to find a wife, to settle down, have a house, have kids together.  I want to have a successful career as a nursing home administrator, where I can change the lives of the elderly, and run a nursing home where no needs are neglected.  If I am constantly bombarded by adults saying that the world is going to end in a few years, why should I apply myself at college next year?  Why shouldn’t I just “live life up” because the world is ending in a few years anyway?
I look back now on fearing if I was even going to graduate high school, and yet, here I am.  18, Class of 2020.  We still live in the freest nation on earth.  Obama transferred out of power peacefully, a true Hitler wouldn’t have, and we barely hear about him anymore.  Are tensions high right now and the future is uncertain?  Absolutely, but the future is always filled with uncertainties, no matter what decade you start your life in.  I think of the verse that says that Yahweh is coming back like a thief in the night.  This verse implies that the Lord is coming back when literally not a single person is expecting it.  If He is coming back at a time we do not know, then why do we waste so much time studying end times stuff?  Why would He allow a human, a being that He created, to pinpoint the plans of Himself to a tee? If we were wrong before that Obama was going to be our last president, why wouldn’t we be wrong again? If people were talking that I wouldn’t be able to graduate high school because the LORD is coming back, why wouldn’t they be wrong again?
I get it that I am in a different place of life than adults.  I haven’t lived through the hardships of an adult life yet, although it’s around the corner for me.  I get it that we are all yearning for Him to come back.  As believers, we can’t wait for everything to restored to perfection.  However, we are called to live a holy life until that day comes, whenever that may be.

“Who of you by worrying, adds a single hour to their life?”

Since I am a young person, I understand the mindset of my generation. Adults sensationalizing does come with a terrible cost. By setting end times dates, by saying that America deserves to be judged, and by saying that everything that is happening today is the worst it’s ever been in history, you must realize that you are striking fear into the hearts of young children, you are placing doubt into the minds of teenagers who are wondering about their future, and as a result, young adults will stop respecting you.  If you are the person to always set dates, you lose all credibility as a believer as you are representing Yahweh on earth to the nations, and you are turning away a new generation of young believers at your foolishness.
Love your neighbor as yourself.  Be a light, not a hammer, to those who are blinded by indoctrination.  And remember, despite what happens in November, 10 years, 20 years, until the time Yahweh comes back, He is in control, not us.  If Yeshua didn’t even know when He was going to come back, why should we as humans spend any more time worrying about it?
Thank you for reading.