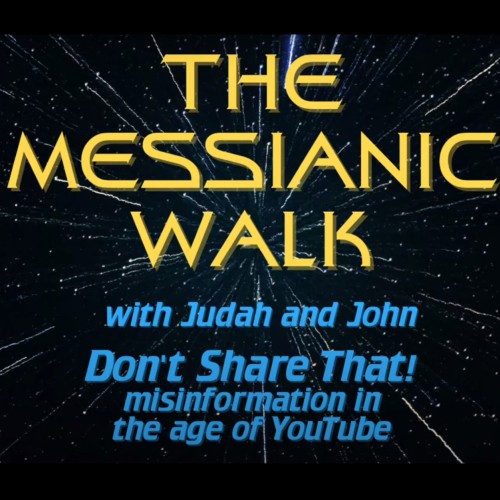 Friends, have you heard things like this on social media?

All of the above are real quotes from the Facebook pages of my Messianic friends.

And all of it is hot garbage.

Messianic apologist J.K. McKee and I discuss this on our new podcast episode:

Some people shrug, “Ah, who cares, there are always a few nuts.”

No friends, it’s worse than that. A majority of folks in Hebrew Roots believe this nonsense. I suspect even a majority within the broader Messianic movement.

If we are God’s people, then yes, it matters.

If God’s people care about truth, then yes, it matters.

I’ve been sounding this alarm for years now: our faith communities are filled with nuts who can’t discern left from right. They don’t know how to tell if something is true. They post videos and articles on their social media pages without investigating whether they’re true. They have no credibility in the eyes of the secular world. They are written off by their peers, friends, and family as fruitcakes. They don’t use their God-given intellect. Their skepticism is used exclusively against expert viewpoints; meanwhile they swallow YouTube videos by crackpots as if it were divine Gospel.

For these people, when a medical expert gives his advice on medical matters, he’s clearly influenced by Big Pharma. But if Ovadia Ben Clem on YouTube gives a contrary opinion, his word is God’s own truth.

If a scientist gives his opinion of a scientific matter, it’s to be viewed with extreme skepticism. But when Yahushuyah Yahservant writes an article for Natural News giving a contrary opinion, the matter is settled.

Here’s why it matters.

Why would anyone believe what you have to say about God and Messiah when you’re blathering nonsense about science, medicine, or politics? It’s a complete turn-off. How will your unbelieving friend feel when you post that “THE CORONAVIRUS VACCINE IS THE MARK OF THE BEAST!!!111”?

Any rational person would completely write off the person spouting that nonsense.

Maybe you have secular family members. How do you think they view your political conspiracy theories? If you post, “Thus saith the LORD: Biden is not President, never will be, and Trump will be sworn into office in June”, this will only alienate such people – if not for politics, than for pure reason and rationality. And when that prophecy inevitably turns out false, what will they think then? Won’t they rightfully think you a crackpot and false prophet? Won’t they rightfully see you don’t care about truth?

When so many people believe nonsense, you know what happens? It creates a hostile environment for the sane. It makes genuine believers ask themselves if they’re welcomed, or if they should find a different community.

I know this because of personal experience. A few years ago, when people left my congregation amidst fighting and public disputes over flat earth, I wrote,

A few months ago I wrote about my friend Jonathan, who left the Messianic Movement to become a Baptist. One of the reasons Jonathan left the movement? Jonathan says,

The groups are overrun by conspiracy theorists and false prophets. There are mainstream Messianic teachers supporting flat earth, the fiction of gravity, the falsehood of the moon landing, as well as the electromagnetic healing properties of linen. I will pause again to remind you that these false teachings I am bringing out were not taught by all groups, but they are all far to prevalent. I am aware that there are these teaching in other groups as well, but they have seem to found a home in the Messianic/Hebrew Roots/Torah Observant movement. I asked a messianic friend about the number of crazy things being taught and believed, his response was, “Yeah, swing a cat.” This is a sad commentary on the state of these groups.”

By posting conspiratorial nonsense to your Facebook profile, you are hurting the Messianic movement and its goal of the salvation of Israel.

Just a few months ago, I wrote about a good friend in the Lord, Lucas. I’ve known this kid – now 18 years old – since he was a little boy. He’s attended my congregation in Minnesota all that time.

Lucas wrote that the sensationalistic nonsense in the movement is a turn-off for him:

The president of my childhood was Barack Obama. I barely recall Bush ever being in power. Obama became our president when I was 7 years old, and he left when I was 15. During those whole 8 years, I don’t think I heard a single positive thing going on in the government. I grew up hearing all these negative things that were happening to our country, and I used to worry about it. I agree that he was not a great president for this country, BUT I grew up hearing a lot of sensationalism tied into it. Statements like, “Obama is the worst president we’ve ever had”, or “Obama did more harm to this country in eight years than all other presidents combined.”

This led Lucas into a kind of crisis of faith and identity. Why is so much sensational nonsense spewed from our community? Should Lucas find a different community, one that values truth over sensationalism?

And now we repeating the same mistake, only we’ve doubled down!

*“Thus saith the Lord: Biden will never be President!” *

“Kamala Harris is the Whore of Babylon”

Dear God, save us from ourselves. What’s wrong with us?

Friends, if this is you, I urge you to change course. By posting politicized sensational garbage, you alienate young people from our movement.

But, today I issue a warning to all the adults in our movement regarding sensationalism, because it does damage the hearts of young people.

How you can do better

I hope I’ve convinced you of the seriousness of misinformation that so many Hebraic and Messianic folks are promulgating on their Facebook pages.

I am convinced, friends, if you take even just a few of these action items to heart, if you use them before you post on your social media, you will begin to repair the brokenness that exists today in God’s people. We can turn this ship around, but it takes small steps in the right direction from each person. Including you, dear Kineti reader. I hope this post has encouraged you in that regard.