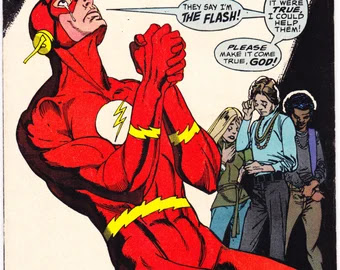 Last week in the US, a teenager took a rifle into an elementary school and murdered 19 people, mostly children.

And this is merely another in a long string of school shootings that have plagued this nation since the 1990s.

After the tragedy, social media was flooded with citizens and politicians offering sympathy,

“My thoughts and prayers are with the families.”

Maybe you wrote something similar on your Facebook page?

This generated a great backlash of secular cynics, many politically motivated, who responded:

“We don’t need your useless thoughts and prayers! How many kids have to die before you shut up and actually do something to prevent the next shooting?

“Thoughts and prayers” is the equivalent of thinking you are doing something to contribute, without having to do anything at all at the same time.

There’s some truth to what they’re saying.

At shabbat dinner this week, I talked to my kids about this and asked if they had heard people mocking “thoughts and prayers”. Indeed, they had heard.

What’s our answer; are “thoughts and prayers” as useless as “sending good vibes”?

To answer, I told my kids the parable of the Good Samaritan.

You already know the story. In the parable, a man is robbed, beaten, stripped naked, and left for dead along the road.

A kohen sees the beaten man along the road. But he doesn’t help, and instead walks to the other side of the road.

A Levite walks by. He sees the man, but likewise doesn’t help.

Finally, a Samaritan sees the man. He applies medical treatment, transports him to the nearest inn, and pays for his stay and expenses.

What does this have to do with school shootings?

This parable in its original context was to show who is our “neighbor” in the context of the Torah mitzvah, “Love your neighbor as yourself.” In this original context, Yeshua tells his disciples that the Samaritan, was a true neighbor to the beaten man, and that we likewise should show mercy and compassion to strangers. The Kohen and Levite were religious, but by their inaction they were useless to God and to men.

I told my kids this parable means that we as God’s people must be people of action. “Thoughts and prayers” are not enough.

In the parable, it was the person who took action that was deemed righteous. Even more righteous than the ultra-religious, praying Kohen and Levite.

I told my kids that God wants us to be people of action, not merely airy religious fluff sending people good vibes through social media. Prayer and action. Faith and works.

If a brother or sister is naked and lacks daily food, and one of you says to them, “Go in shalom, keep warm and well fed,” but you do not give them what the body needs, what good is that?

It’s not enough to well-wish, even in prayer. We need action, otherwise the prayer is dead.

A rational mind will ask, “If action is what matters, why pray at all?” 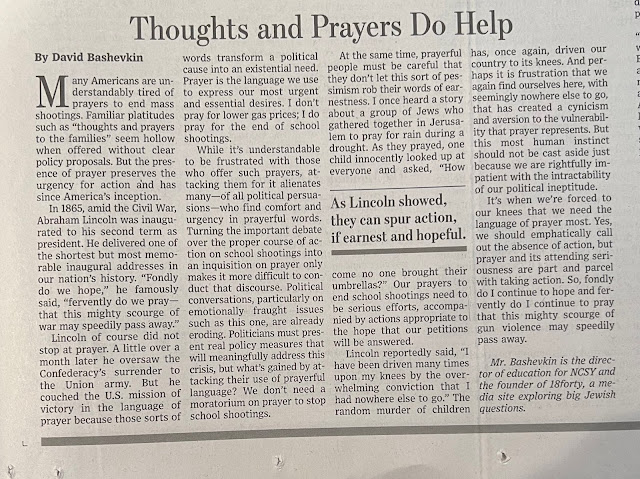 He notes that when Abraham Lincoln addressed the nation during the US Civil War, he asked the nation to pray that war would cease:

Fondly do we hope, fervently do we pray – that this mighty scourge of war may speedily pass away.

Lincoln was a man of prayer and action. Why pray? Bashevkin writes,

[Lincoln] couched the U.S. mission of victory in the language of prayer because those sorts of words transform a political cause into an existential need. Prayer is the language we use to express our most urgent and essential desires. I don’t pray for lower gas prices; I do pray for the end of school shootings.

Catch that? He is saying that earnest prayer – not meaningless good vibe sentiments – drives a whole people to action through urgent need.

Good vibes don’t do that. Prayer does.

Prayer is fuel in the engine of action.

I’d add to Bashevkin’s statements: We sincerely believe that a people united in earnest prayer, willing and ready to act, can move the heart of God.

(And sometimes, we the faithful and prayerful are the very means of God’s intervention in the world.)

James, the same one who wrote that prayer without action is meaningless, also writes, “The effective prayer of a righteous man is powerful.”

To be effective, prayer must be earnest and fervent. To be righteous, a man must take action.

Making it real: what can we do in tragedies like this?

If I’ve convinced you that we need to be people of action, you might ask what’s the next step. How do we help people affected in the recent school shooting?

One way is charity, which is considered a mitzvah – a commandment and good work – in both the Hebrew Bible and the New Testament.

Unlike any other time in history, it’s easy to give to charity around the world thanks to the internet.

Some other ways to help: if you run a small business, you could donate a portion of profits, or ask customers to donate on checkout. If you work for a large company, you can donate and ask your employer to match your donation.

Change can also be change on the individual level. A change of mind, a change of heart. Let me ask a hard question, dear reader: is it time to reconsider your views about guns? I’m not asking you to go woke here. I’m asking you to consider Scriptural ethics above political concerns. Our allegiance is to God, not any political party.

Are your views on guns informed mainly by the ethic of Scripture, or by the talking points on political talk shows and podcasts? Given the Bible’s overarching theme of pikuach nefesh preservation of life above almost all else, might we consider a more balanced approach to guns and gun access?

If your answer is, “any gun reform is veiled leftism!”, you probably have a blind spot here.

Change can also be on the political level. Write to politicians to take action to prevent school shootings. Maybe you feel posting armed guards at schools would help. Maybe better security measures at schools. Maybe stricter gun access laws. Maybe better background checks. Maybe laws to restrict access to high powered guns. Maybe it’s better mental healthcare for disturbed individuals. Tell your elected leaders how you feel. Tell them what you believe must be done. Petitioning political power is also a form of action, and Biblical figures from Esther to Nehemiah to Paul used it to accomplish good.

Dear Kineti reader, can you earnestly pray and take action to end school shootings? Let’s make progress on this, little by little. I’m going to agree with Mr. Bashevkin in fervent prayer and action that this mighty scourge of violence in schools would come to an end. Will you do the same, dear reader?