Shalom, Tabernaclers, Judah here letting you know that Shavuot, one of the 7 feasts of the Lord, takes place this weekend and you’re invited to join us with special guest speaker Andrew Gabriel Roth.

Special guest speaker Mr. Andrew Gabriel Roth, the Messianic Jewish author and theologian will be speaking both days. If you can only make one day, make it Sunday — that’s Shavuot, and it’s when multiple groups from around the Twin Cities will be joining us for the holy occasion.

Shavuot is one of 3 feasts of great importance in our faith. Maybe you’re new to Shavuot, or just want to learn more? Read on.

Shavuot, literally “Weeks” in Hebrew, gets its name from the 7 weeks (49 days) we count off after Passover, leading up to the Feast of Shavuot. In Christianity, it has become known by the Greek-derived term Pentecost, the pente- prefix referring to the 50th day. So, for these last 7 weeks, we’ve been counting the omer, building up to Shavuot.

In the Jewish sage Maimonides’ famous enumeration of 613 Biblical mitzvot (commandments), we find 6 commandments the Lord has laid out for Shavuot:

1. Appear before the Lord on Shavuot

We know from historical accounts, the Bible, and tradition that Israel interpreted “the place that God will choose” to be Jerusalem, in particular, the Temple in Jerusalem. For thousands of years, the people of God travelled up to the Temple, singing songs of ascent and pilgrimage songs, such as the beautiful Psalm 84.

This Shavuot, while we can’t appear at the Temple (may God cause it to be rebuilt soon), we can appear before the Lord with thanksgiving and with songs of ascent and pilgrimage, longing with the psalmist, “Better is one day in your courts, O Lord, than a thousand elsewhere!”

And rejoice before the Lord your God at the place he will choose as a dwelling for his Name—you, your sons and daughters, your male and female servants, the Levites in your towns, the foreigners, the fatherless and the widows living among you.
-Deuteronomy 16 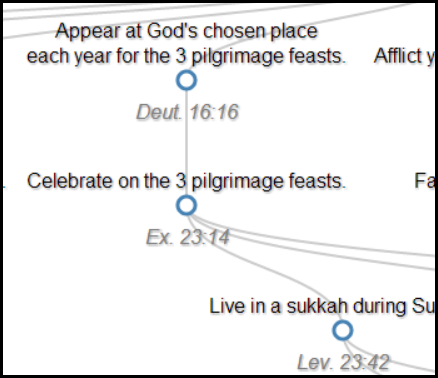 This is one we can keep today – celebrate before the Lord! Shavuot was a time of giving the best of one’s harvest as an offering to God at the Temple.

Without the Temple, we can at least celebrate before God and give thanks with praises and prayer, the fruit of our lips.

3. Do no work on Shavuot

“On that day you are to proclaim a holy gathering and do no regular work. This is to be a lasting ordinance for all generations to come, wherever you live.”
Leviticus 23 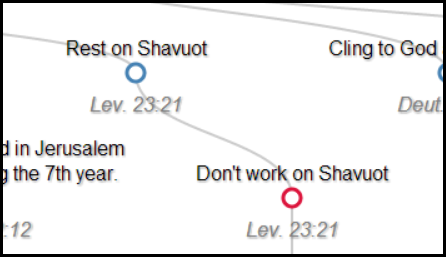 God makes a point to say Shavuot is both eternal and global. This has implications for this generation; many of us live outside Israel. Yet God says, “wherever you live”. Still others say our religion is enlightened and the old Law obsolete or otherwise no longer binding. Yet God says, “this is a lasting ordinance for all generations to come.”

“When you present to the Lord an offering of new grain during Shavuot, hold a holy gathering and do no regular work. Present a burnt offering of two young bulls, one ram and seven male lambs a year old as an aroma pleasing to the Lord. With each bull there is to be a grain offering of three-tenths of an ephah of the finest flour mixed with oil; with the ram, two-tenths; and with each of the seven lambs, one-tenth. Include one male goat to make atonement for you. Offer these together with their drink offerings, in addition to the regular burnt offering and its grain offering. Be sure the animals are without defect.”
-Numbers 28 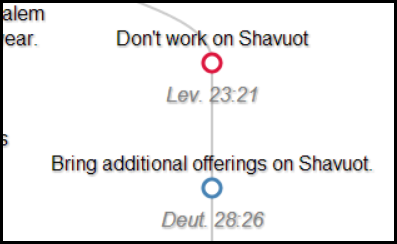 Looking at the text, we’ve got these Shavuot harvest offerings:

• Drink offerings to coincide with all the offerings

All the animals offered were without blemish, and this was in addition to the daily sacrifices.

Eeach person brought grain offerings from the harvest. This may be what is referred to in an earlier Shavuot commandment: to appear before the Lord not empty-handed, but according to the blessing of heaven received in the form of a harvest.

6. Bring two loaves as an offering

“Count off fifty days up to the day after the seventh Sabbath, and then present an offering of new grain to the Lord.From wherever you live, bring two loaves made of two-tenths of an ephah of the finest flour, baked with yeast, as a wave offering of firstfruits to the Lord.“
-Leviticus 23:17 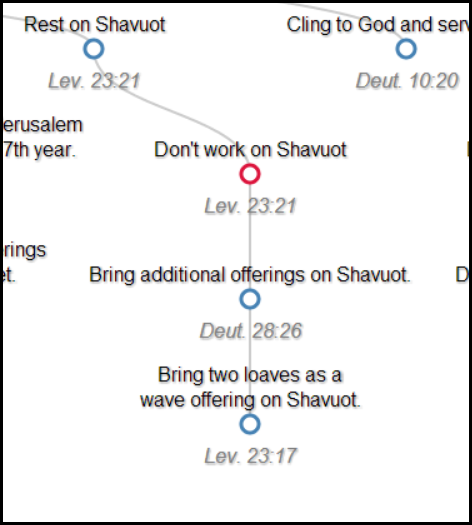 Messiah’s arrival may inform our understanding. The two loaves may symbolize the giving of the Torah and the Spirit. Both are waved before God as a pleasing offering. 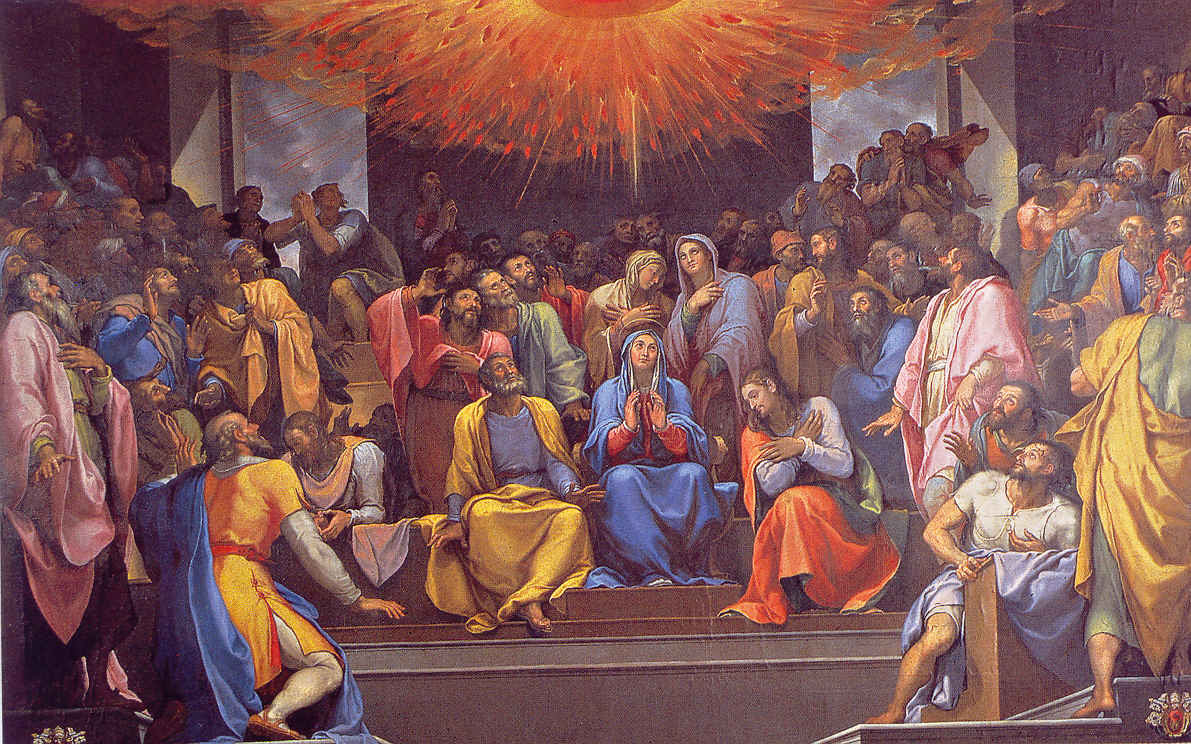 Nearly 2000 years ago, just days after they witnessed Messiah ascend from the Mount of Olives into heaven, the disciples were gathered in Jerusalem for Shavuot. At that time, Jerusalem was packed to the hilt! Keeping the commandment to appear in Jerusalem for Shavuot (Deut 16), God’s people from all over Israel and the surrounding nations came up to the Temple and brought offerings to God. God fearing men from all over Israel, Greece, Egypt, Rome, Asia Minor…all flowing up to God’s house in Jerusalem. (Kind of a picture of what’s to come, eh?)

The disciples, too, were gathered there (Acts 2). At that unique Shavuot 2000 years ago, God performed a miracle in front of the people gathered in Jerusalem: tongues of fire descend from heaven and rest on the heads of the disciples. The spirit of God resting on them, the disciples spontaneously began declaring the wondrous works of God…in different languages!

The loud and strange noise of different languages all shouted aloud together drew a crowd – what are these men doing and what were they saying? The Scripture records it like this:

“Now there were staying in Jerusalem God-fearing Jews from every nation under heaven. When they heard this sound, a crowd came together in bewilderment, because each one heard them speaking in his own language. Utterly amazed, they asked: “Are not all these men who are speaking Galileans? Then how is it that each of us hears them in his own native language? Parthians, Medes and Elamites; residents of Mesopotamia, Judea and Cappadocia, Pontus and Asia, Phrygia and Pamphylia, Egypt and the parts of Libya near Cyrene; visitors from Rome (both Jews and converts to Judaism); Cretans and Arabs-we hear them declaring the wonders of God in our own tongues!” Amazed and perplexed, they asked one another, “What does this mean?”

Declaring the wonders of God in Hebrew, Aramaic, Greek, Latin, Coptic, Etruscan, and more — hallelu! (May it be again in our days.)

The Spirit of God falls on the first believers, the disciples, and thousands join their cause. For this reason, Christianity considers Shavuot (Pentecost) as the birth of the church.

And yet, followers of Messiah today have largely forgotten Shavuot. Some in the Eastern Church mark the occasion with little fanfare, some devout Catholics remember a “Feast of the Holy Spirit” on Pentecost (the Greek name for Shavuot), and of course there is the Protestant sect of Pentecostals (an ironic name, since they by and large don’t actually celebrate Pentecost!)

Today, we’re in a unique position. We’re blessed: God has taken the blinders off — at least in this area! — in which we see both Torah and Messiah, and this broadens our understanding of Shavuot.

While the Jewish people remember Shavuot as the giving of the Torah, and while the Christian world remembers the giving of the Holy Spirit, we see a beautiful weaving of old and new. Consider these parallels between Shavuot in ancient Israel and Shavuot among the disciples in the 1st century:

• Languages:
– When the Torah was given, tradition holds that it was given in 70 distinct languages, the number of the nations. (Shemot Rabbah 5, Shabbat 88b)
– When the Spirit was given, the disciples declare the works of God in many languages.

• Two loaves
– God commands in the Torah that we bring two great loaves of bread as an offering of thanks before God. (Lev 23) Perhaps it is no coincidence that two loaves are commanded here, one symbolizing Torah and truth, the other symbolizing Messiah and spirit.

We, the disciples of Israel’s Messiah, are awakening to the full beauty of Shavuot. Not merely as a Catholic reinterpretation, nor as a Protestant makeover, but as the authentic and ancient and holy Feast that God commanded, that Messiah strengthened, on which both Torah and Spirit were given, enabling us to serve God in both Spirit and Truth.

What encourages me still is, if God gave the Torah on Shavuot 3500 years ago, and gave his Spirit on Shavuot 2000 years ago, what does the future hold? I am certain it is only good and perfect things for us, his people! 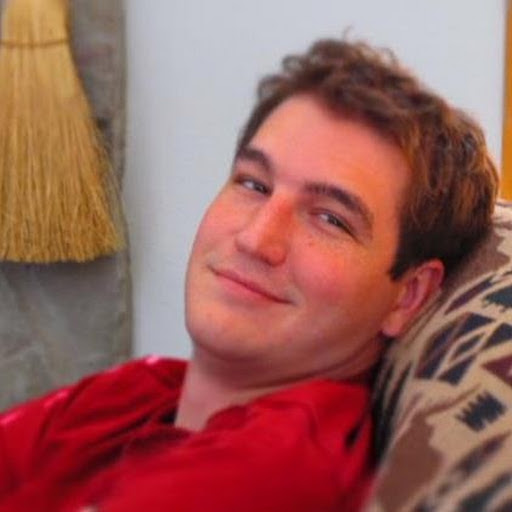 Thanks for reading. Seeing you at the FEAST!
-Judah