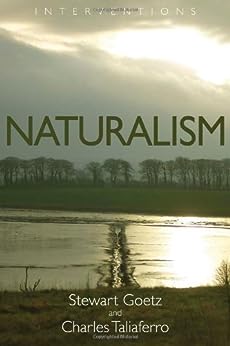 Any of us who have been engaged in the apologetics endeavor knows that it can take up enormous amounts of our time. The reason for this is the fact that when it comes to Christian apologetics (which is the rational defense of the Christian faith), it really takes a multidisciplinary approach.  The one area that always creeps up into apologetics is the issue of naturalism which says that nature is the “whole show.”  In other words, there are really two general kinds of explanations for events: intentional accounts (which demonstrate signs of value, design, and purpose) and non-intentional accounts (which lack values, design, and purpose). Naturalists generally only punt to one kind of explanation- non-intentional accounts.

Here are a couple of definitions of naturalism:

” Naturalism has three fundamental tenets: the physical world is the sum total of reality (metaphysics); all causes are deterministic (etiology); and all knowledge comes through science (epistemology). Naturalism requires that consciousness emerged from nonconscious matter; rationality is the product of nonrational processes; personal action is the result of deterministic processes; alleged moral duties and the notion of human dignity are the outcome of valueless processes; natural beauty is the product of mindless material forces; the universe’s beginning came from nothing (being came from nonbeing); the earth’s amazing fine-tuning is the result of unguided physical processes; biological life emerged—against astonishing odds—from nonliving matter.”–A Little Book for New Philosophers: Why and How to Study Philosophy (Little Books) by Paul Copan, pg 68.

A person who does not affirm the supernatural— God, gods, ghosts, immaterial souls, spirits— is a person who affirms naturalism. For naturalists, nature is all there is. And if it is not science, then it is nonscience (i.e., nonsense). Most naturalists put stock in empirical, evidence-based ways of justifying opinions about what is real; this is exemplified by science.  Naturalists think such beliefs are more reliable and objective than those based on intuition, various kinds of revelation, sacred texts, religious authority, or reports by people claiming to have had religious experiences. – Dictionary of Christianity and Science, Copan, Tremper Longman III, Christopher L. Reese, Michael G. Strauss, General Editors, pgs 469.

In other words, please don’t ever say there is any agency or interference into the natural world by an outside cause that is non-natural. As Vern Poythress says:

“ Methodological naturalism says roughly that modern science does conduct itself and should continue to conduct itself with the assumption that in the areas that it investigates, all the particular events and all the general patterns take place according to general laws that for practical purposes can be regarded as impersonal; and even if there are some exceptions, these are best ignored for the sake of getting on with the task of science. Methodological naturalism can be converted in some people’s minds into ontological or metaphysical naturalism, the view that there is no personal God and that the physical domain is all that there is. For philosophical and religious reasons, some people use methodological naturalism as a stepping stone toward ontological naturalism. But logically the two are distinct. Methodological naturalism more modestly proposes a practical restriction on the kind of hypotheses that scientists may consider, based partly on the pragmatic argument that the restriction will help science make progress rather than getting caught in fruitless byways. A number of people maintain that science by definition has a firm commitment to excluding the supernatural.” (see Redemming Science: A God Centered Approach, pgs 261-264).

We see science is limited to the following range of concerns:

1. Science only is concerned with the material aspects of the natural world.
2. Science restricts itself to the secondary/natural causes and would forgo consideration of a primary cause (such as a divine/intelligent primary cause) as part of the explanatory structure.
3. Science seeks to reduce the systems observed to their component parts as a way of simplifying observation and explaining the behavior of the higher levels of organization.

Naturalism  is not a discovery of science. It must always be viewed as a presupposition of science as presently practiced. Therefore, the rules of the game have been rigged in advance.

In the end, we see the reductionist approach here. In the reductionist model, all natural phenomena can be understood in terms of lower and more elementary levels of existence, all the way down to particle physics (consciousness reduced to biology, biology reduces to chemistry, chemistry reduces to physics, and all physics reduces to the “behavior” or elementary particles and forces. (Peters, T. and Gaymon Bennett. Bridging Science and Religion (London: SCM Press, 2002), 72-73.

Naturalism and the Historical Method

This is seen in the discussions about the resurrection of Jesus. If one has decided that many of the events in the New Testament are not possible (because of an a priori commitment to naturalism), it will impact how they interpret the evidence (after examining it).

The reason many scholars and historians will never accept the evidence of a bodily resurrectionas a possibility is mostly due an ontological commitment to naturalism which impacts their methodology. For example, in a debate with John Dominic Crossan of the Jesus Seminar, William Lane Craig exposed Crossan’s naturalistic presuppositions. Craig asked Crossan if there was anything that would convince Crossan that Jesus rose from the dead as an historical fact.

Crossan responded by saying a person has the right to say,” I by faith believe that God has intervened in the resurrection event.” However, Crossan then goes on to say, “It’s a theological presupposition of mine that God does not operate in that way.” (see Paul Copan. Will The Real Jesus Stand Up? A Debate between William Lane Craig and John Dominic Crossan.Grand Rapids, MI: Baker Books. 1998).

Deductive reasoning is called a priori (prior to looking at the facts) and inductive reasoning is called a posteriori (after seeing the evidence). It is evident that in many cases, the objection to the resurrection of Jesus is mostly philosophical in nature and is a priori.  Methodological naturalism is a position that says science or history should seek only natural explanations and that attempts to find supernatural causes are ipso facto, not science. In contrast, metaphysical naturalism starts with the presupposition that all that exists is nature. Presupposing that all that exists is nature and then using methodological naturalism to prove this presupposition is arguing in a circle. In my experience, many people confuse metaphysical and methodological naturalism.