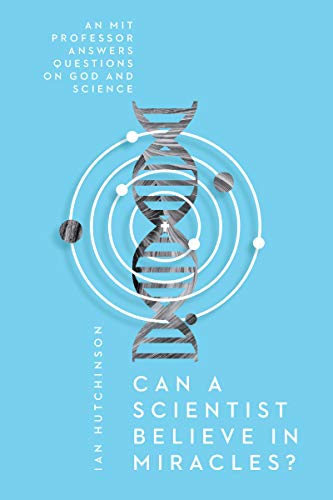 Can a Scientist Believe in Miracles?: An MIT Professor Answers Questions on God and Science (Veritas Books) by  Ian Hutchinson. 288 pp. IVP Books.

Ian Hutchinson is a plasma physicist and professor of nuclear science and engineering at Massachusetts Institute of Technology. He was educated at Cambridge University, and received his doctorate from Australian National University. He has done several Veritas Forums. I became familiar with his book Monopolizing Knowledge.

The format of this book is set up as a question and answer book. It is exhaustive in nature and Hutchinson is more than qualified to answer these questions. His scientific background is clearly demonstrated in this book.   One of my favorite questions Hutchinson is asked is the following:
“ Are there reasons, grounds, for belief in something beyond the finite? What is the compelling reason to believe there is a God upholding the universe? For nonscientific beliefs, what types of evidence do you rely on?”

Hutchinson responds by saying that hardly any of our beliefs rest on one supporting reason alone. Belief in God is no exception. He cites five different types of reason for belief in God, following the  mnemonic AEIOU:

Order:  Perception that the idea of God makes sense of everything.

Utility:  That it is useful, beneficial, or prudent to believe in God

Another question that I have pondered was mentioned in the book as well. Hutchinson answers the question as to if there is growing evidence that humans are hard-wired to detect agency, does this mean that religion is less plausible and should be pushed into the shadows? Hutchinson says:

“When it is said that humans are hard-wired to detect agency, what is meant is that we have well-tuned mental and physiological abilities to perceive agents, such as animals and other humans. Does this ability render religion less plausible? The antitheistic argument is approximately that the ability is “overactive,” that we have a built-in tendency to detect agency even when it is not there. And that, it is said, explains religion, ghosts, demons, and other superstitions: we are detecting agents that aren’t there because our agency-detecting circuits are overactive. An evolutionary advantage is conveyed by agency-detecting ability, since it helps us (and many other animals) find prey and avoid predators. However, these arguments are not science and affect the plausibility of theism hardly at all.

First, it is completely obvious, regardless of any modern research, that we possess strong and sensitive agency-detecting abilities. The most elementary observation of an infant can persuade anyone of that. Casual observation also reveals humans’ tendency toward anthropomorphism: attributing quasi-human attributes (especially agency) to nonhuman entities. Skeptics have for centuries taken the anthropomorphic language of most religious expression to indicate that religion is nothing but anthropomorphism. Science adds little to that presumption.

Second, there is to my knowledge no demonstration, experimental or otherwise, or persuasive argument that the agency-detecting ability is systematically overactive. In fact, if evolution is responsible for it, one would expect it to be active to just about the optimal degree: not too much, not too little, so as to make our survival chances about the best they can be. And that seems to be roughly true by inspection. Certainly, our agency detection is imperfect and subject to errors. Sometimes we detect an agent when one is not there; we see what we take to be a sheep when it is really a rock. Sometimes we fail to detect an agent that really is present, and it surprises us, maybe bites us! But that is insufficient for a demonstration that it is overactive. It is (so far as I can see) just as often underactive. I’d say we might be detecting God when he is not there, or we might be not detecting God when he is there.

What is at work, then, when evolutionary psychology “explains” an aspect of religion is a scientific attempt to explain away a higher-level perception by offering a scientific-sounding alternative explanation. The presumption is that reductionist scientific explanations are always preferable and supersede other types of explanation. However, once you concede that our agency-detecting ability is actually very good at detecting agents, it is just as plausible to say that a God who wants us to “detect” him as agent (because he wants us to have a personal relationship with him) arranges to make agent-detection capability a part of our standard mental equipment. If evolution is some (or even most) of how he did that, it changes nothing. It simply reaffirms what we knew already: that the ability is natural. We do not say that our having a hard-wired ability to detect agents renders our friends less plausible; why would it do so to God?”- pp, 90-91.

As one reads the sections on creation, evolution, and science,  some may not agree with Hutchinson’s conclusions. He does agree that the standard Neo-Darwin model has been established. But he doesn’t see God and evolution in conflict. Despite this, there are plenty of gems in this book. It is a tremendous contribution indeed!