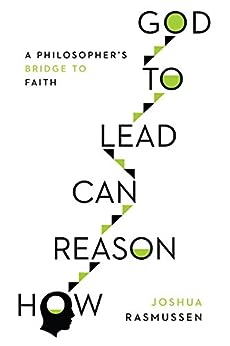 I became familiar with philosopher Joshua Rasmussen when I purchased his book The Bridge to Reason: Ten Steps to See God. In this book, Rasmussen employs the instruments of reason and common experience to build a case for God’s existence. Anyone who is familiar with Edward Feser’s work (Five Proofs for God’s Existence) or other Thomistic philosophers may be familiar with the direction of this book. The difference is Rasmussen uses his own language and makes some of the arguments Feser makes more digestible.

For example, Rasmussen starts with what he calls the “The Foundation Theory.” He says this  makes sense of three things:

“ First, it makes sense of how the totality of everything can lack an outside cause or outside explanation. Reason and experience together testify that totals of dependent things are themselves dependent; from dependence comes only dependence. Purely dependent things cannot, then, be the basis for the self-sufficiency of the totality of things. Instead, the root of self-sufficiency is an independent nature. Second, the Foundation Theory makes sense of the difference between potential realities and actual ones. A potential reality is actual only if something actualizes it. If, instead, the totality of dependent realities lacks any actualizer, then nothing accounts for its actuality. The entire totality would be a mere potential. Nothing, then, would be actual. Something is actual, however. Therefore, there is an actualizer of dependent realities.” This actualizer is actual by nature, with no potential not to be actual. In other words, it has a necessary nature. This necessary nature accounts for how the foundation can be an independent foundation. Finally, the Foundation Theory makes sense of how there can be anything at all. With a foundation in place, there is something rather than nothing because the foundation has necessary existence.(Pg 33-34).

Note Rasmussen doesn’t use the word “contingent” here. Instead, he utilizes the word “dependence.” Dependent things exist because of things they depend on while an Independent Foundation exists because of the necessity of its own nature. As Rasmussen says “ The Principle of Actuality predicts that every actuality is either (1) foundational—with no potential to not exist—or (2) actualized by something prior. In the case of Creation, the only thing that could be prior is the necessary foundation itself. This foundation “actualizes” Creation not by directly actualizing it. Rather, foundation actualizes Creation by directly actualizing some event e, and this basic act of actualization then entails the existence of Creation. Again, no circularity is required.” (Pg 50).

Rasmussen builds a case for the foundation’s nature. Whatever the foundation of existence is, this the five features of the foundation are that has the following features:  (1) self-sufficiency, (2) independence, (3) necessity, (4) ultimacy, and (5) eternality. On a more abstract level, the foundation’s “pure actuality” means it has simplicity and inner purity. In other chapters, Rasmussen then spends time taking the Foundation and connecting it with four dimensions of reality: (1) mental, (2) material, (3) moral, and (4) mathematical (Pg 136).

As I just said, if you have read Edward Feser’s Five Proof’s book, or other Thomistic writings, this book may be familiar territory. However, the way Rasmussen presents the material is both unique and creative. In his chapter called “Challenging the Bridge” Rasmussen does answer common objections. He has done his homework here. In the end, for the non-philosopher, this book might be a little challenging. However, as I said, I find it to be less technical than some other books on the topic.

Given I direct two campus apologetic ministries, I think this book is very helpful for my work. I enjoyed and strongly recommend to others.