For the last several years I have done plenty of outreach on a major college campus. I have also been the director  of an apologetics ministry as well. On the college campus where I am located at, there are a fair amount of atheists. Hence, I talk to at least four to five atheists a week.  I have also spoken to plenty of agnostics and people from other religious backgrounds. But over the years I have seen several patterns emerge. In other words, when I probe deeper and ask students why they are atheists or how they define their atheism, I see the same things. So here is what I continue to see:

1. Students don’t know how to think about God

How do we know God exists?  Over the years, when I have been asked this question, I used to just jump to an argument for God. I would sit down and try to explain it in detail to the individual. I have now decided to take a different approach and back up: I am convinced more than ever that the first question in the discussion is “How should we approach the existence of God?” or, ” What method should we use?” I find 90% of the people I talk to have never taken the time to think about this question. Granted, it is not as if churches or the local university (unless it is a philosophy of religion class) teaches on a topic such as this.

Now I know that when  you ask a Christian, Jewish person, Muslim, or Mormon as well how they know what they believe is true, they might just say, “I have faith.” This should cause us to stop and ask if that is an adequate answer. It probably won’t go very far in a skeptical and pluralistic culture. To see more on this, see our post called The Most Common Objection on a College Campus.
Or, see Seven Approaches to God’s Existence

In this case, students define truth as what is practical, or what ‘works.’ It is no secret that many apologists have written books on the truth question. In other words, the statement “we are living in postmodern times” has almost become cliche in today’s society. Hence, because of the impact of post-modernism, many seem to assume that college students are not interested in objective truth. So the fallout is that people are not asking whether Christianity is true.  See our post called  Do College Students Care About Truth?

3. Students don’t have all the information

This is what bothers me the most. When I say they don’t have all the information, I am not saying anyone needs to have an exhaustive background in history, philosophy, theology, science, or other subjects to find a relationship with God. When I have shown students there are resources on the existence of God, they look bewildered. After all, they aren’t hearing or getting this information on the campus. Or, if they were raised in a church and now they are agnostic, they sometimes say “I never heard any of this in the church I grew up in!” So for some of them, it is almost a settled issue that there is no God. Any resource or evidence showing the opposite can tend to be met with resistance. See our reading list here:

This is a huge issue. Granted, many students don’t have a background in this area.

Epistemology is the branch of philosophy concerned with questions about knowledge and belief and related issues such as justification, truth, types of certainty.

I have lost count of the number of times that I have encountered the following comments by students:

“There is absolutely no evidence for Jesus or your God”

“Science has shown that there is no God”

“Unless you can perfectly demonstrate that God exists or Jesus is the Son of God, you need to admit all you have is faith”

It is statements like the ones here that demonstrate to me that there is not even a basic understanding of epistemology. Keep in mind that I am not asking everyone to get a philosophy degree and to be an expert on such a heady topic. While in seminary I was blessed to take some classes in philosophy. However, I am by no means an expert! But the people making these types of claims just overstate their case and sound very naive. A more nuanced approach would be to say, “ I have looked at the evidence in this area and I don’t find it to be sufficient.” Or, “I don’t think there are good reasons to think God exists or that Jesus is the Son of God.” 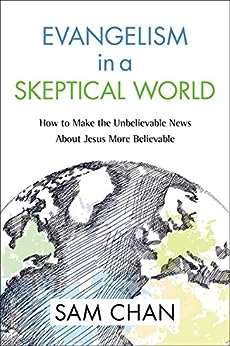 There is a new book out that mentions something of great relevance. The author says the following:

“Why do we believe some things but not others? For example, once upon a time, we believed that the earth was flat. But now we believe it’s round. Yet most of us have not been in a spaceship orbiting the earth to see for ourselves that the earth is round. Yet we believe that it is. What is the mechanism for our belief? Why do we believe some things and not others? This field of study is called epistemology. But when we apply it to religious beliefs—why do some people believe in the existence of God, but others don’t?—it is called religious epistemology.”-Evangelism in a Skeptical World: How to Make the Unbelievable News about Jesus More Believable
Sam Chan and D. A. Carson

If you are not familiar  with religious epistemology, see our clip here.

The Issue of Certainty

There is some overlap here between this issue and what I just mentioned about bad epistemology.  I don’t have any need for absolute or exhaustive knowledge. As Paul Copan says here:

A similar approach to this issue is seen in Mortimer J. Adler’s Six Great Ideas where he has a chapter called The Realm of Doubt. The problem we meet is when we attempt to decide which of our judgments belong in the realm of certitude. In order for a judgment to belong in the realm of certitude, it must meet the following criteria: (1) it cannot be challenged by the consideration of new evidence that results from improved observation, nor can it be criticized by improved reasoning or the detection of inadequacies or errors in the reasoning we have done. Beyond such challenge or criticism, such judgments are indubitable, or beyond doubt.

A judgment is subject to doubt if there is any possibility at all (1) of its being challenged in the light of additional or more acute observations or (2) of its being criticized by more cogent or more comprehensive reasoning.

The point is that in order to believe in God demands will never be based on absolute certainity.

Campus ministry isn’t easy. But Jesus calls us to be salt and light in the dark places. We also don’t always get to resist the places where the soil is hard.