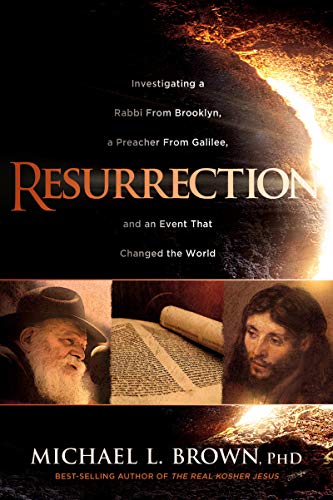 Resurrection: Investigating a Rabbi from Brooklyn, a preacher from Galilee, and an Event that Changed the World, Dr. Michael L. Brown. 208 pp. Charisma House.

My friend Dr. Michael L. Brown, who is the premiere messianic apologist has given us a new book on the central tenant of our faith: the resurrection of Jesus the Messiah.  Dr. Brown takes a unique angle in this book with his attempts to reach the Jewish community with the truth about the resurrection. He spends a great deal of time discussing the similarities between the claims about Rabbi Menachem Mendel Schneerson and Jesus.

Within Judaism, there is a sect called Hasidic Judaism. Within Hasidic Judaism, there are leaders who are called a “tzaddik” which is Hebrew for “righteous men.” A tzaddik is sometimes viewed as a Rebbe which means master, teacher. By the way, in the book of Acts, it was during Stephen’s famous speech that he refers to Jesus as a tzaddik : “Which one of the prophets did your fathers not persecute? They killed those who had previously announced the coming of the Righteous One, whose betrayers and murderers.” (Acts 7:52)

Such an example of a present day tzaddik was seen in Rabbi Menachem Mendel Schneerson (1951-1994), who was the leader of the Chabad Lubavitch Hasidim. Some of the followers of Rabbi Menachem Mendel Schneerson think He is the Messiah and that He will come back from the dead (Schneerson died in 1994). Some in the Lubavitcher movement have even asserted that Isaiah 53 can be used as a proof text that the Messiah will rise from the dead. Of course, this has led to great controversy. Some in the Orthodox community have complained that the attempt to portray Schneerson as one who will rise from the dead and return a second time has too much in common with the Christian and Messianic claim about Jesus.

Dr. Brown also notes that some in the Some in the Lubavitcher movement have also said Schneerson was divine. Of course, there is a case for a divine Messiah in the Tanakh (as Brown explains in Chapter 8). He appeals to the Angel of the Lord and the debate over the theophany’s in the Scriptures.

Dr. Brown also compares the resurrection of Jesus with the another messianic figure who was Sabbatai Sevi. Sevi was a seventeenth-century Jewish teacher who claimed to be the Messiah and was heralded by a contemporary named Nathan. It is said after Sevi’s death in 1676 that his brother found his tomb empty but full of light. If anything, the Sevi story sounds like it was borrowed from the resurrection story about Jesus.The Sevi story has little historical backing. In contrast to the resurrection claim of Sevi, in the case of Jesus, there are multiple eyewitness appearances after his resurrection (see 1 Cor. 15). What is more ironic is that Sevi later left the Jewish faith for Islam. Both of these messianic followings don’t have the same evidence as the resurrection of Jesus.

The group cannot reconcile itself to the fact that its deepest yearning has been disappointed, and so it perpetuates a state of denial that then provokes it to reorganize its view of reality to conform to this denied state of affairs. So having said this, suppose the early disciples experienced cognitive dissonance; that is, they really wanted Jesus  to be the Messiah, and they were very disappointed when Jesus was crucified. So being unable to reconcile themselves to this fact, they reorganized their reality to resolve their dissonance and disappointment by projecting His resurrection into their reality. They further reinforced their perspective by adding converts to their ranks.

This hypothesis runs into problems and it really isn’t much different than thy hallucination hypothesis which has been answered as well.

In the end, we know Micah spoke of a time when the nations would go to a restored temple to learn about God (4:15). Amos also spoke of all the nations coming to the God of Israel (Amos 9:12), and other prophets spoke of the inclusion of Gentiles into God’s redemptive plan (Ezek 17:23; 31:6; Dan 4:9-21). This is why just as Israel is called to be a light to the entire world, the Messiah’s mission is also to be a “light to the nations” (Isa. 49:6) If the role of Messiah is to spread the knowledge of God to the non-Jewish nations, than  this has happened.  Israel’s Head, the Messiah, while being  called to restore the nation (Israel)  and use the nation to bring blessings to the other nations of the earth—has now allowed about 1.4 to 2 billion non-Jews to be followers of the one true God.  Without a resurrection, a despised and executed criminal like Jesus would not be a likely candidate for allowing this to happen.

Having published a book on this topic as well, I am so happy to see more scholars like Dr. Brown publish on this topic. Many Christian apologists do a fine work with the resurrection. But they often fail to provide the Jewish context as well as address Jewish objections to the resurrection. Dr. Brown provides several quotes from leading Jewish rabbis and scholars in this book. In the end, this is a nice addition to his ongoing work in the messianic apologetics field.