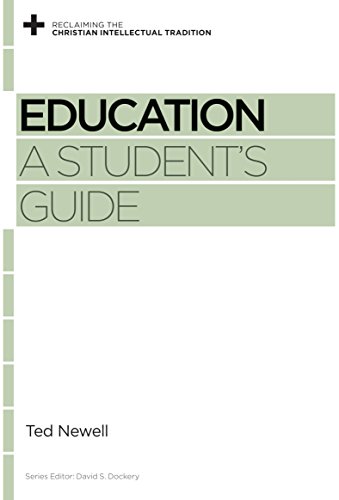 Ted Newell wants his readers to understand the importance of education.

In Chapter 1,  The Potential of Christian Education, Newell says, “Education can be defined as widely as “learning a culture.” The meaning of the Latin term educare is “to educe, to draw out latent possibilities.”- pg 17. Newell notes that there is plenty of Christian thinking about education. There is more than enough books, journal articles,  academic, professional, websites,  or family conferences and  seminaries and Christian universities.

According to Newell, Christians accept a too-narrow understanding of education’s work. The modern world dramatically narrows the range in which historic Christian beliefs are public knowledge. He wants to show how to reclaim a Christian intellectual tradition in education.- pg 14.

Newell does this by discussing  five distinct paradigms of Christian education through different eras in history. Understanding the role of education in the reformation of societies will enable churches, families, and schools to reclaim their task for the spread of the gospel in our world today.

Newell notes that our faith was birthed with an emphasis on education.  The apostles Paul, John, Peter, and others wrote documents for local churches in Corinth or Rome and elsewhere where individuals engaged in a battle of knowledge. The New Testament effort might be summed up in 2 C or. 10:5: “We demolish arguments and every pretension that sets itself up against the knowledge of God, and we take captive every thought to make it obedient to Christ” (NIV).

In Chapter 2, Newell emphasizes that the documents describing Jesus’s career—the four Gospels—make clear that he was a teacher. He proclaimed, and he instructed; the New Testament makes little distinction between these two activities. In dozens of instances, his contemporaries referred to him as “teacher” or a related term such as “rabbi,” and he accepted the description (Mark 10:17–18; John 13:13).  Educator H. H. Horne’s Jesus, the Master Teacher “discusses every conceivable personal and pedagogical trait, judging Jesus to be highly accomplished on every item. Jesus taught in the tradition of a wisdom teacher in Israel. He rarely used scholarly or technical language. He employed wisdom sayings, or mashalim—including puns, similes, metaphors, and proverbs sometimes in extended discourses.

In Chapter 3, Newell discusses the issue of how the ekklesia ( a noun for assemblies when a city-state came together to enact a drama or determine political action)  and oikos ( households in the Greco-Roman world included a nuclear family of husband, wife and children, relatives) served as catalyst for education.

In Chapter 4, Newell discusses Cloistered Education. The Christian faith had a role on shaping universities between  500 and 1200. Also, abstract knowledge gradually took on more educational importance than the narratives of faith.

In Chapter 5, Newell discusses the role of Empirical Education (1800 to the present).  Most modern-era public schools and major universities educate people in secular knowledge for secular aims. Here the emphasis is  knowledge was based in empiricism as well as  a shift in  organization of learning to utilitarianism, as well as a shift from  administration toward efficiency and a shift from direction by religious bodies (usually) to direction by governments.- pg 75.

In Chapter 6, Newell  highlights the role of Progressive Education (1800- to Present).  One of the most influential educators during this period was John Dewey (1859–1952). Founder of the University of Chicago’s experimental school, he wrote The School and Society (1900), The Child and the Curriculum (1902), and Democracy and Education (1916),  Dewey understood his work as repairing the division of science and self. Action of one side (say, the child) and (the curriculum) on the other would bring resolution. The subjective child brought the sides to a living unity by acting and reacting on the knowledge of the curriculum. Humans only “know” as they act on objects. Dewey did not believe in unchanging truth. He thought truths depend on their era. Science changes. Humans only know what works—technically stated, what proves fruitful in generating further knowledge. Dewey’s truth was relativistic and very pragmatic. There is no doubt much of modern-day education has been impacted by Dewey. As Newell, rightly says, “Christian educators should question progressivism. Is discovery learning faithful to revealed Christian beliefs? Broadly, how should conservative Christians understand John Dewey, Howard Gardner, or Paulo Freire.- pg 107. Christians need a theory that is faithful to revelation that allows for more than one best scientific way to teach.- pg 108.

In Chapter 7: The Next Christian Education, Newell exhorts his readers about how there must be educational change in the midst of a scientific/empirical mindset. Since, the empirical way of thinking penetrates every area of modern society with only a few exceptions and powerful and subtle expectations influence all schools and universities, Christian scholars in science, social sciences, or the humanities—any non-theological discipline— must make a public case based on authorities that are publicly acceptable.”- pg 111. This is a similar exhortation to what J.P. Moreland has discussed in is latest book on Science and Secularism.  As Newell says, “Theology needs to be public (not private) truth, and the box in which science placed religion needs to be broken open.”- pg 115.

Newell also reminds his readers that the family and the local congregation will need to be a continual catalyst for renewal in education. We need to stress education as worship and be cultural storytellers into the present.

If you are passionate about education Newell’s book is a nice primer. I highly recommend it.