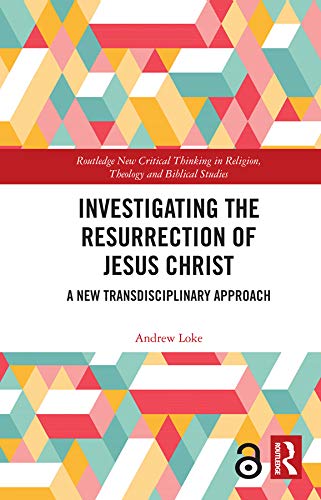 Andrew Loke is an up and coming scholar who has published other books on cosmology and Christology. Given I have published my own book on the resurrection of Jesus, I took great interest in this resource. Loke’s book does not disappoint. I was eager to see if Loke provided a different approach than previous books on the topic.  The book title says Loke is using a “Transdisciplinary” approach to the resurrection. To elaborate on this,  he says “ In addition to the tools and methods of analytic philosophy, this monograph uses the methods of historical-critical biblical studies, such as a consideration of the religious, social, and cultural background of the earliest Christians, their understanding of sacred texts, their religious experiences, their interactions with surrounding cultures, and the challenges that they faced. This monograph also incorporates insights from psychology and comparative religion. It advances the assessment of the relevant evidence by addressing recent psychological research concerning memory distortion and philosophical discussion concerning miracles. It incorporates the perspective of comparative religion by examining claims of resurrection in other contexts, including that involving cognitive dissonance in the case of the rabbi (‘Rebbe’) Menachem Mendel Schneersohn (1902–1994), some of whose followers claim his ‘resurrection’ in the context of religious ridicule and skepticism (Marcus 2001). By engaging with various disciplines, this book demonstrates how a transdisciplinary approach can be useful for bridging the divide between biblical, theological, and religious studies and contributing to the discussions in each discipline concerning the resurrection of Jesus.” – pg 2.

Loke does achieve this in this book. Thus, he crosses over into several disciplines. Loke discusses criticisms and provides responses to skeptics such as Bart Ehrman, Richard Carrier, and others. Loke rightly tackles one of the most common objections to the resurrection which happens to  be the intramental/hallucination hypothesis (Chapter 4). He clarifies the difference between hallucination, illusion, delusion, and vision. He says:

“A  hallucination should be understood in the present context as ‘a sensory experience which occurs in the absence of corresponding external stimulation of the relevant sensory organ, has a sufficient sense of reality to resemble a veridical perception, over which the subject does not feel s/he has direct and voluntary control, and which occurs in the awake state’ (David 2004, p. 108).”- Pg 91.

An illusion, however, is defined as perceiving an external entity with the normal processes of sensory perception, but not as what it is (i.e. there are other causal factors which distort the perception of the properties of this entity). -Pg 92.

A delusion is a false belief, while a mass hysteria is a collective delusion. There have been documented cases of mass hysteria. – Pg. 92.

As Loke notes, “Given that hallucinations are caused intramentally, expectation is evidently a relevant factor. Bloom (2009, pp. 109–110) notes that, for mass hallucination to occur, having common triggers (e.g. a shared environment suggesting a shared idea-pattern or percept) is not enough; each of the percipients must be prone to hallucinatory activity as well. In what follows, Loke argues that it is unlikely that these conditions are fulfilled in the case of the resurrection appearances. One issue is whether all the ‘eyewitnesses’ already had prior belief that Jesus would rise from the dead. The historical evidence indicates otherwise.”- Pg. 96.

Loke’s specific attention to detail shines through in this chapter. He does the same with other chapters as well.

Loke thinks that despite the incomplete record we possess, the historical consideration should be the following:

1.Jesus’ crucifixion in around AD 30.

2.Individuals (including former unbelievers Paul and James) and groups of people (including Jesus’ apostles who were familiar with him) claimed to have seen the resurrected Jesus shortly after that.

3.The threat of persecutions against them and their willingness to die for their religion.

4.The importance of the claim of Jesus’ transphysical bodily resurrection for the earliest Christians.

5.The reverent fear of being judged by YHWH for being false witnesses were present among them.

6. The skepticism of bodily resurrection were present among them and their audiences.

7. The commonsensical idea of ‘checking out’ the ‘eyewitnesses’ were present among them.

8.The mobility and ‘networking’ among the earliest Christians.

9. The author of Matthew’s account of the guard of Jesus’ tomb would not have committed a ‘credibility suicide’ by inventing an easily falsifiable story for his apologetic purpose.

Loke also discusses the objection to miracles. He thinks miracles are identifiable ad that the naturalistic alternatives fail. This combined with a relevant religious context will entail sufficient epistemic justification for the conclusion of a miraculous resurrection.- Pg. 197.

While much more can be said, this is a significant contribution to the field of resurrection apologetics. I highly recommend it.