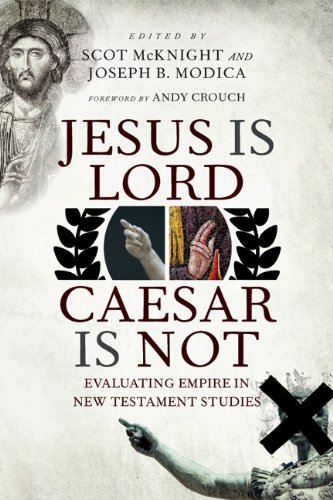 “Paul, a bond-servant of Christ Jesus, called as an apostle, set apart for the gospel of God,  which He promised beforehand through His prophets in the holy Scriptures,  concerning His Son, who was born of a descendant of David according to the flesh,  who was declared the Son of God with power  by the resurrection from the dead, according to the Spirit of holiness, Jesus Christ our Lord,  through whom we have received grace and apostleship to bring about the obedience of faith among all the Gentiles for His name’s sake,  among whom you also are the called of Jesus Christ;  to all who are beloved of God in Rome, called as [f]saints: Grace to you and peace from God our Father and the Lord Jesus Christ.”-Romans 1: 1-7

Michael Bird has an excellent summation of Paul’s passage here in Romans. He says:

“Romans 1:3-4 has political teeth as long as the Messiah is envisioned as the ruler of the world. Paul opens his letter to the Romans by weaving together a standard epistolary greeting with some traditional material about the “gospel of God” and “Messiah Jesus.” The gospel of God is the good news from God and also about God. The background of this “gospel” (euangelion) lies on the one hand in the Jewish world with the promise of the coming reign of Yahweh to bring an “The title Christos (Messiah) in Paul has routinely been de-Judaized and depoliticized in Pauline scholarship by those who want to show that Paul did not have a messianic faith.[30] Yet the evidence overwhelmingly points in the other direction with messianism forming the hub of Paul’s Christology (see Rom 9:5; 1 Cor 10:4; 15:22; 2 Cor 5:10; 11:2-3; Eph 1:10, 12, 20; 5:14; Phil 1:15, 17; 3:7). Importantly, “Messiah” implies kingship in Jewish tradition (2 Sam 7:14; Ps 2:2, 7; 89:19-21, 26-27; Psalms of Solomon 17.32). Paul explicates this gospel “regarding his Son, who as to his earthly life was a descendant of David, and who through the Spirit of holiness was appointed the Son of God in power by his resurrection from the dead” (Rom 1:3-4). Importantly, lineage meant legitimation.  Jesus is linked to the house of David, from whose house Israel’s rightful king would come to fulfill the prophetic promises.  Yet Jesus is also the “Son of God,” which is both a messianic title and expresses Jesus’ unique filial relationship with Israel’s God. Contra much scholarship, what we have in Romans 1:1-4 is not some primitive adoptionist Christology that still lurks beneath Paul’s high Christology.

These terse remarks are not about adoption but accession to the throne beside Yahweh. Behind all of this stands a contrast between two kinds of sonship and two types of kingdoms.  The designation of Jesus as the “Son of God” does not follow on from the deification of his adopted father, nor is the title earned by any military battle. Jesus was rather designated the “Son of God” by resurrection from the dead. All the more significant because Roman religion did not believe in a resurrection. Consider also that resurrection was politically threatening as it constituted the vindication and victory of those killed for opposing imperial rule as it is in Daniel 12, 2 Maccabees 7 and Revelation 20. Resurrection implies a reordering of power, an apocalyptic upheaval of the world, an inversion of the pyramid of privilege, so that those ruled over in fear are raised to reign in divine glory. The resurrection of Jesus to kingship means the supplanting of all kingdoms that compete with it. Paul celebrates that a person put to death by Roman authorities as a royal pretender had been brought back to life by Israel’s God and is now installed as Lord of God’s coming kingdom.”-Jesus Is Lord, Caesar Is Not: Evaluating Empire in New Testament Studies, Scot McKnight, Joseph B. Modica, and Andy Crouch